The Shredders – A Band That Really Rocks

Lead singer Joshua Holland takes his position behind the microphone in a small makeshift music studio in Kitty Hawk. Cueing his fellow band members, he gives a slight nod and the room suddenly fills with the music and lyrics of Bob Dylan’s “Knockin’ on Heaven’s Door.” 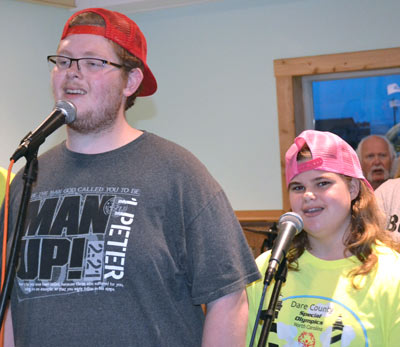 To Holland’s right are his loyal back-up singers, younger sister Allison Holland and fellow band member Emily McCoy, who also doubles as the band’s interpretive dancer. To his left, jamming on the keyboard is self-taught musician Zach Nelson and on lead guitar is local legend Phillip Harold “Bubby” Barkley, Jr.

These talented musicians belong to the OBX Shredders, Dare County’s first Intellectual and Developmental Disabilities-inclusive band. With members ranging from 15 to 60, it really doesn’t matter whether they are rehearsing in the studio or are on stage in front of a crowd – the Shredders are always rocking.

The brainchild of local radio personality Lisa Brickhouse Davis, the idea for the Shredders grew out of her efforts in 2015 to launch Dare2Care’s OBX Shred Fest, an annual spring event to raise funds for music programs for those with special needs as well as the local veterans’ community.

Led by 2018 International Blues Challenge Semifinalist Ruth Wyand along with instructors John Wilkinson and Shelli Gates of the Motu Music Foundation and George Graham, the Shredders first debuted in 2016 and have definitely gotten into their groove. In fact, they’re a highly sought-after band – booked right through the fall with gigs both locally and out of town, including Elizabeth City and possibly Raleigh.

In the two years since its creation, the band has had a huge impact on not just its members but also the community.

The Shredders perform at the 3rd annual Dare2Care OBX Shred Fest in Spring 2018. Photos by Dare2CareOBX 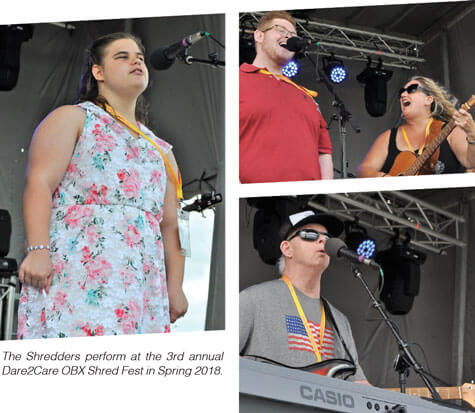 “Being part of the Dare2Care Shredders Band has not only had an impact on our athletes by boosting their self-esteem and overcoming shyness and stage fright, it has made them feel like part of the community,” said Dare County Special Olympics Executive Director Kathleen Morgan, who adds that the band members are all talented athletes that compete in a variety of sports.

“When they are on the stage…everyone notices them not for their disabilities, but for their talent, their willingness to try something new and difficult and to step out of their comfort zones. They are sending a message of awareness that they are people, just like everyone else.”

“Bubby has always, since we were kids, strummed his guitar pretending to be Elvis, Johnny Cash, or any other musician singing on stage,” says Albert. “To watch him actually be on a stage strumming his guitar and singing fills my heart with joy, because I know how extremely excited he is about it.”

Albert praised the instructors for their dedication to the Shredders as they’ve made their way to stardom, adding that it’s brought so much happiness to Barkley’s life, along with fellow band members. “Being a part of the OBX Shredders has truly added love and excitement to his life. He loves being with the other band members and feels so happy around each one of them. Music makes Bubby happy, and he feels that him playing is making others as happy as him.” 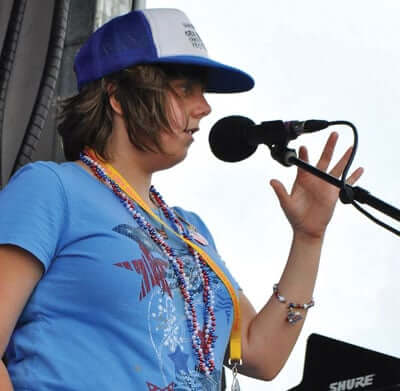 As for the Shedders themselves, they offer a variety of reasons they love jamming with each other during practices and getting up on stage. “It’s a good way to express yourself,” says the oldest Holland. Nelson adds, “It’s a good opportunity to learn music.”

Davis says it’s been an amazing journey since the Shredders first began practicing at the College of the Albemarle and then debuted at the 2nd Annual Dare2Care OBX Shred Fest.

“It’s the most incredible thing you could ever imagine,” Davis said. “I love walking in and hearing them practicing their harmonies. There are all different personalities here and it is great to see how much they’ve bonded and grown.”

She adds, “I’ve been in radio my whole life and music is one place we are all on an equal playing field, it’s one place we all connect. If we are going to bring people together, it should be through music.”

The Shredders have performed at more than a half dozen events including the annual Dare2Care OBX Shred Fest, Tim Tebow’s Special Needs Night to Shine prom and the Special Olympics Spring Games. This fall they will entertain at an event in Elizabeth City and may travel to Raleigh for gig with the Career Council Development Council.

The band’s instructors say they’ve all connected with the Shredders in different ways. For Wilkinson, it’s been Barkley he’s most connected with and whose guitar he custom made to help Barkley with chords. 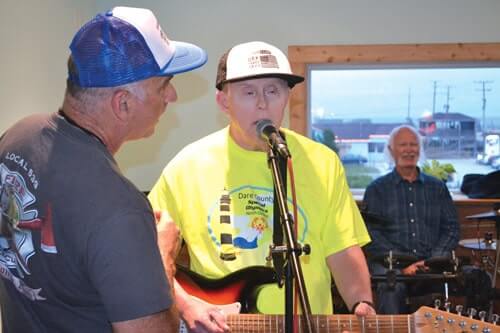 With guidance from John Wilkinson (left), Bubby Barkley hits all the right notes during a recent practice session.

“The word inspiration is so overused, but it’s true,” Wilkinson said. “He’s been given the chance to be Elvis.” Gates adds that the band provides a special place of belonging for its members, not to mention an outlet to showcase their talents.

Being a member of the Shredders has also carried a level of prestige for its members, Gates notes. “They get to go backstage and get lanyards as well as meet members of other bands as peers rather than audience members.” 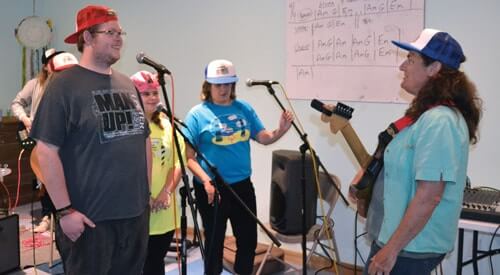 The Shredders, led by Ruth Wyand, practice often together and enjoy the camaraderie the band provides. 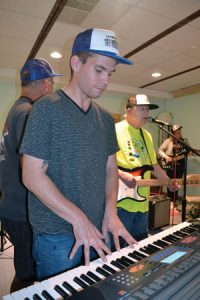 For Wyand, she says it’s been amazing to just see the way they respond when you put a microphone in front of them. “They see stardom and they assume the position. It’s so powerful for them to see themselves on this side of the microphone.”

Stagehand and bass player Josie Wilson has been with the band since its inception and says she was inspired to join the group to honor her brother, who had Downs Syndrome but died before she ever met him. “They are great people and it’s a blessing to be able to work them,” says 19-year-old Wilson.

Whether they are covering for Bob Marley, Bob Dylan or Elvis, this band has undoubtedly found its groove and isn’t showing any signs of stopping.

Back-up singer McCoy perhaps describes the Shredders’ enthusiasm perfectly when asked what her favorite song is that the band sings together. 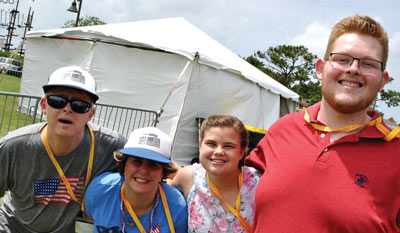 The Shredders smile for a picture before performing on stage at the Dare2Care OBX Shred Fest in Spring 2018. 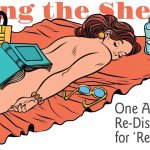 Filling The Shelves: One Avid Reader Re-Discovers Love For “Real Books”Just Causes, Music/Entertainment, Something to Talk About 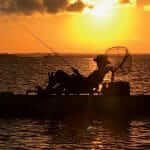