Wes Snyder: Shooting For The Stars

It would be easy for Wes Snyder to focus on the countless challenges he’s faced since becoming a photographer on the Outer Banks just three years ago. Yet it’s also easy to get lost in the wonder of it all as he stares at the Milky Way stretching over the ocean during one of his countless nighttime photography sessions.

“It’s absolutely breathtakingly beautiful and so astonishing to me to watch the Milky Way move across the sky,” Snyder says. “I’ve still got to be moving cameras every hour or so, but I’ll set them up and then I can just hang out on the beach and watch all the shooting stars every night.”

Snyder’s remarkable photos of the night sky have captured the imagination of visitors and locals alike. Especially when they discover how recently he took up photography.

The Beginnings of Wes Snyder’s Photography

After growing up in Charleston, South Carolina, and Ithaca, New York, Snyder found himself getting his first photography lesson while studying at Montana State University. 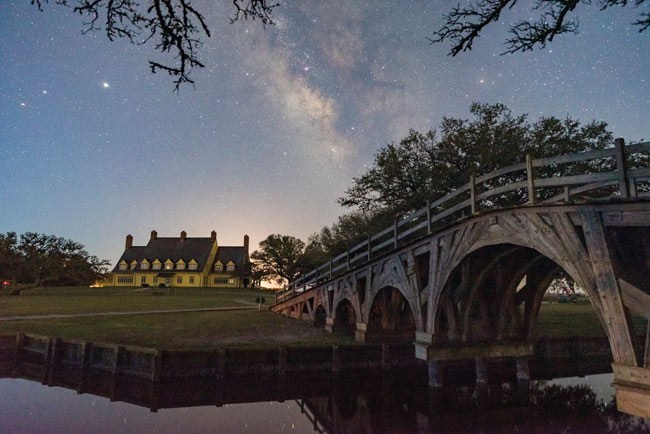 “I remember taking all these beautiful photos of the mountains. They all sucked because the mountains looked so far away,” Snyder recalls with a laugh. “I remember someone telling me back then ‘you gotta have a telephoto lens to zoom in and that’s what gives them that big picture.’ But it wasn’t for another 25 years that I actually owned a telephoto lens.”

He always liked the idea of taking photos. Although he soon found himself in the corporate world at companies doing payroll services and worker’s compensation. With his mom and sister having settled in Mebane, Snyder eventually found his way to North Carolina as well. While working in Winston-Salem, one of his clients was The Lost Colony, which brought Snyder to the OBX.

Like many, he was hooked. Wes started visiting more often. He involved in kiteboarding. When things went south with his job, Snyder found himself camping in Rodanthe in the middle of a storm. He pulled out his phone camera – and nothing would ever be the same.

“I just go, ‘I am never ever bored when I’m taking photos. Always happy, I am never upset,’ ” Snyder recalls of the moment. “I had been spending a long time trying to figure out what am I going to do next?” 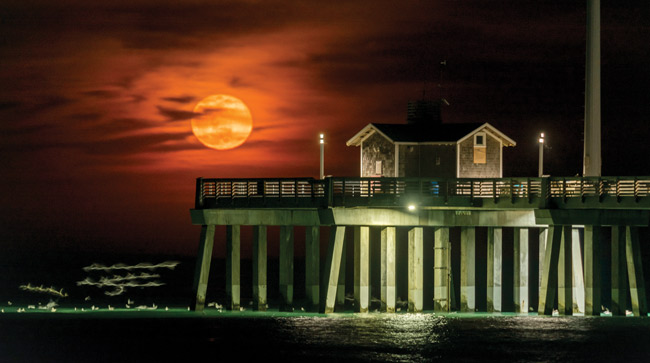 First, he bought a camera: a $900 Nikon D5500 with a couple of basic kit lenses. Then he signed up for two six-week photography classes at the local arts center in Winston-Salem. In fact, they showed him how to do more than shoot in auto. Snyder realized in early 2017 that he had just enough money saved to make a “now or never” move to the Outer Banks. So on March 1st he (and his three dogs) moved into the 110-year-old rental house in Manteo that he’d found on Craigslist.

“I felt like a complete sham even telling anyone I was a photographer at that point because I just didn’t have any clue what I was doing. So I just started taking photos and putting them all on Facebook. I didn’t hide the fact that I didn’t know what the hell I was doing,” Snyder says. “There are so many photographers here that have been around 10, 15, 20 years and their work is phenomenal.”

Two things worked in Snyder’s favor in those early days. The Outer Banks is a connection for many people. So to help them escape their dreary days in Ohio and Pennsylvania, he plastered photos and videos of OBX life to his Facebook page which now boasts more than 40,000 followers.

Secondly, Snyder started doing stuff for free. He hoped the “you get what you pay for” model would be acceptable to his guinea pigs. So for a couple of months, he shot free portrait sessions. Later, when he wanted to learn real estate photography, he tried his hand at that for absurdly low rates. Gradually, he got a following and got skilled enough to start charging middle-of-the-road fees for his work, all while doing his processing work out of his bedroom and his car.

Wes Snyder appreciates the influence of several local photographers. That includes Daniel Pullen, whose work ethic showed Snyder how necessary it is to actively chase the photos you want. Snyder keeps meticulous journals now that detail sunrises and sunsets and moon phases and the movement of the Milky Way. 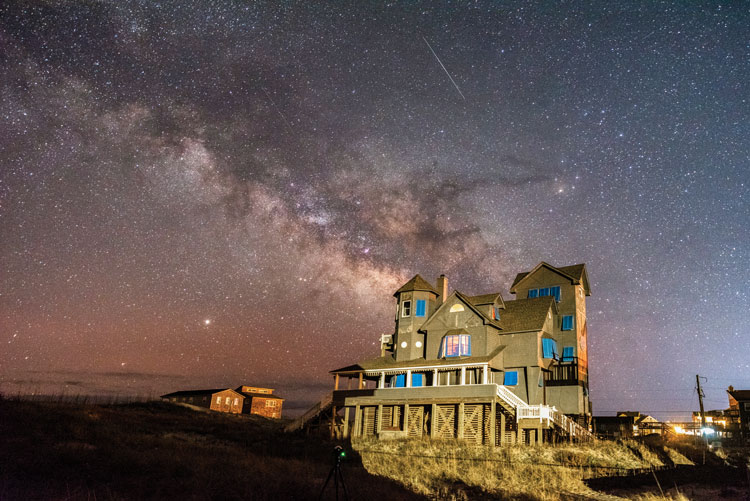 As for that cosmic connection, Snyder was inspired by Allen Phelps and remembers wondering “how is that even possible?” when he saw Phelps’ work. Phelps invited Snyder to a church two hours inland at 2:30 in the morning for a lesson, then Snyder was off to the races.

“From that moment, I realized that I just really, really loved the complexity of night photography,” Snyder says. “And I’ve really tried not to miss any other opportunity since then to catch the Milky Way, because it’s crazy that we’re on this revolving planet and you get to see the Milky Way 10 days out of the month when the moon isn’t out and there are clear skies.”

He’s shot the Milky Way at lighthouses, of course, but also shipwrecks, and the “UFO” house in Frisco. During the pandemic, when light pollution on the OBX was lower than ever, he enjoyed solitary nights getting unique shots in Corolla and atop Jockey’s Ridge. If conditions are just right, Snyder finds himself apologizing to his fiancé, Beth. Of whom he met thanks to a photoshoot shortly after his move! He then hits the road with all his gear.

It took a few years, but he finally managed to upgrade to a Nikon D750. Sadly, his first camera was taken out by a rogue wave when Snyder was shooting the Ocean Pursuit shipwreck. His go-to lens for wide-angle and night shooting is a manual Rokinon 14mm, while for portraits he uses a 24-70mm Tamron.

Snyder also finally has been able to upgrade his computer, too, thanks to a YouTube video  “I am getting a college education on YouTube,” he says with a laugh on how to build a high-end editing platform for less than $1,000, then having someone on Facebook reach out and put the computer together for him. What used to take a week to edit and process now can be done in a few days.

The processing power is necessary because of the complexity of capturing the night sky. It’s not as simple as putting the camera on a tripod and stitching together a time-lapse. At the Cape Hatteras Lighthouse, for instance, Snyder takes about 25 photos of the sky to stack on top of one another as though he took an eight-minute exposure of the stars. The Hatteras light revolves every nine seconds, so separate exposures of the tip of the lighthouse are taken to ensure the beam of light is captured just so. Then there’s the foreground.

“I get all the exact same scene. I just have to expose every single piece of the scene differently,” Snyder explains. “So the process itself may take two hours of developing the photos. I have 100 photos of the exact same scene in different exposures when I’m done. That’s what it takes to get those night photographs.”

Where to see Wes Snyder’s Work

Prints of the Milky Way and other landscapes can be purchased on Snyder’s website. He’s produced a calendar and recently released a book, “Journey Through the Outer Banks,” available in local shops. Snyder’s hope, though, is that his artistic journey is just beginning. 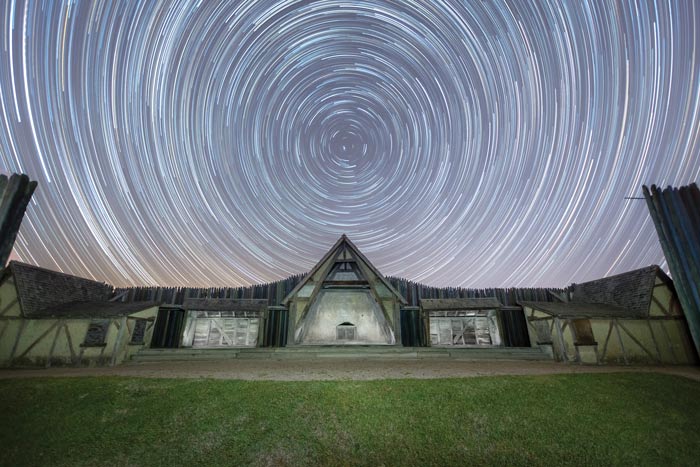 Photos are nice, but the ultimate goal is to turn his photos  and others he admires into works of art that he can make and sell in a Manteo storefront. Snyder has been studying and practicing for two years on how to make custom resin pieces from his photos. Cloud 9 shop owner Ginny Flowers gave Snyder a place to work  “Dog hair and resin do not mix under any circumstances!” he said of trying to do the pieces at his house. Furthermore, Bob Pacitto made frames and helped perfect the process. Now, Snyder has his first true pieces of art finished and ready for sale.

“It is absolutely, mindbogglingly beautiful when this piece is done. It takes the colors and it just makes it pop and it almost looks like it’s in 3-D,” Snyder says. “I’ve been wanting something that just said, ‘This is a Wes Snyder piece.’ This is handmade in the Outer Banks by the photographer. You can’t get any more original.” 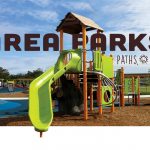