The parachutes look small in contrast to the massive, metallic gray aircraft. Excitement is thick in the air as eager children watch hundreds of them descend from the plane, each one carrying some sort of candy as a passenger. The 1940s aircraft circles above them, the words “Spirit of Freedom” emblazoned on its side. 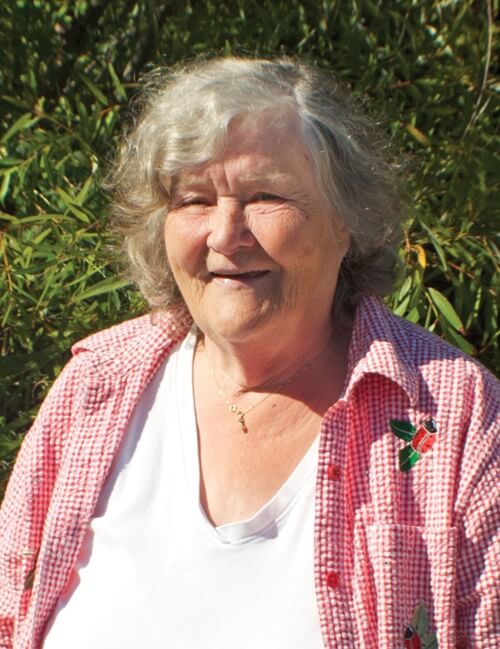 Edmonds today. Currently living in Manteo, she volunteers for many local charities and nonprofits including Outer Banks Hotline.

Karen Edmonds, now in her 70s, watches the iconic drop each year alongside hundreds of families and remembers her childhood in Berlin, Germany. She recalls seeing the countless candy drops that were made during the humanitarian Berlin Airlift where cargo-filled aircraft delivered the necessities of survival into a divided Berlin.

Edmonds, who moved to the United States in 1960, witnessed the Candy Bomber Manteo candy drop in its inaugural year during December of 1999. “When I saw it, my whole childhood played in front of me,” she said. “From then on, I said I wanted to make the show every year to let the kids see what it really was.”  Edmonds has been helping to organize the Manteo event ever since to commemorate the historic aviation missions from her childhood. She said, “My goal is to have it for the children.”  Previous years have attracted over 800 visitors to the event in all kinds of weather. 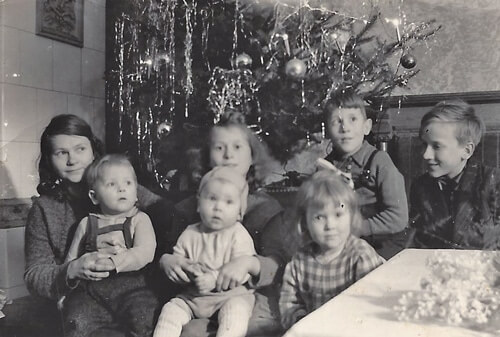 Berlin in 1943. Edmonds with her family on Christmas, which they called Wiehnachten (“Christmas Day”)

The Berlin Airlift occurred from June 1948 to September 1949, as a result of the Soviets cutting off sections of Berlin from supplies in postwar Germany. United States C-54 aircraft operated 24 hours a day to get food, fuel, and coal to the starving and freezing Berliners. Pilots encountered many problems during the drops such as erratic German weather and blockade efforts from the Soviet Union. During the 15 months of the Berlin Airlift, an estimated 1.8 million tons of supplies were flown in, keeping an estimated 2.4 million people alive. The candy drops showered the children in Berlin with gum, candies, and treats that many had never seen before.

The original Berlin candy bomber is 1st Lieutenant Gail Halvorsen. Edmonds first met Halvorsen when he began participating in the drops at the Dare County Airport; however, she also once spotted him as a child in Germany. Edmonds formed a close relationship with the candy bomber over the years. 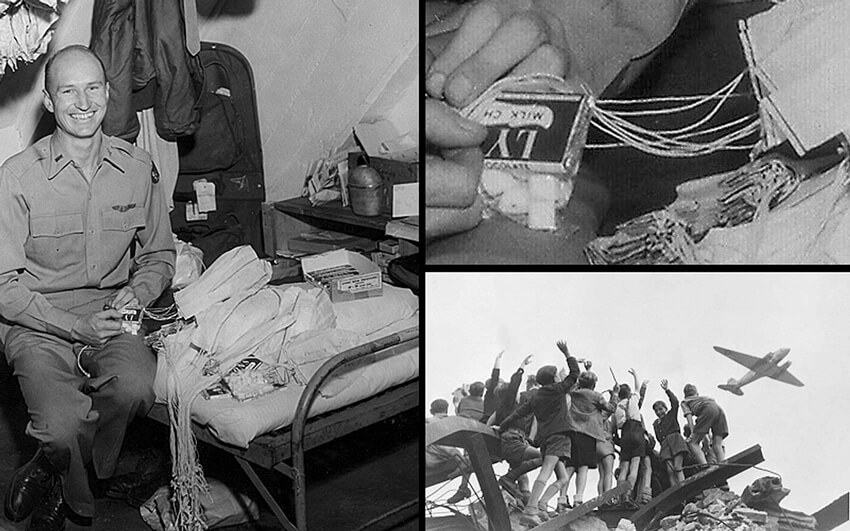 Photos of Halvorsen and the Berlin Airlift candy drops in Germany. By the end of the operation in 1949, more than three tons of candy were dropped to the children of Berlin.

“He’s now 94. I saw him in Germany in 1949 briefly,” said Edmonds. “Over the years when he came here to Manteo we became pretty good friends.” Poor health has kept him away for several years and with 48 grandchildren and great grandchildren, the holidays were a hard time of year for him to travel. When she asked him to attend this year, Halvorsen told Edmonds, “It’s 4,000 miles, but I’ll do it for you.” Edmonds says the fact that he’s coming again this year, “makes my Christmas.”

The story of how Halvorsen initiated the candy drops is a popular one. While visiting Berlin on one of his off days, he came across a group of children and was surprised that they did not ask him for candy like children would in other parts of Europe. The Berlin children did not even fight over the two sticks of gum he gave them from his pockets. He decided to drop candy to them the next day, telling them that he would wiggle the plane’s wings so they would know the delivery was from him. 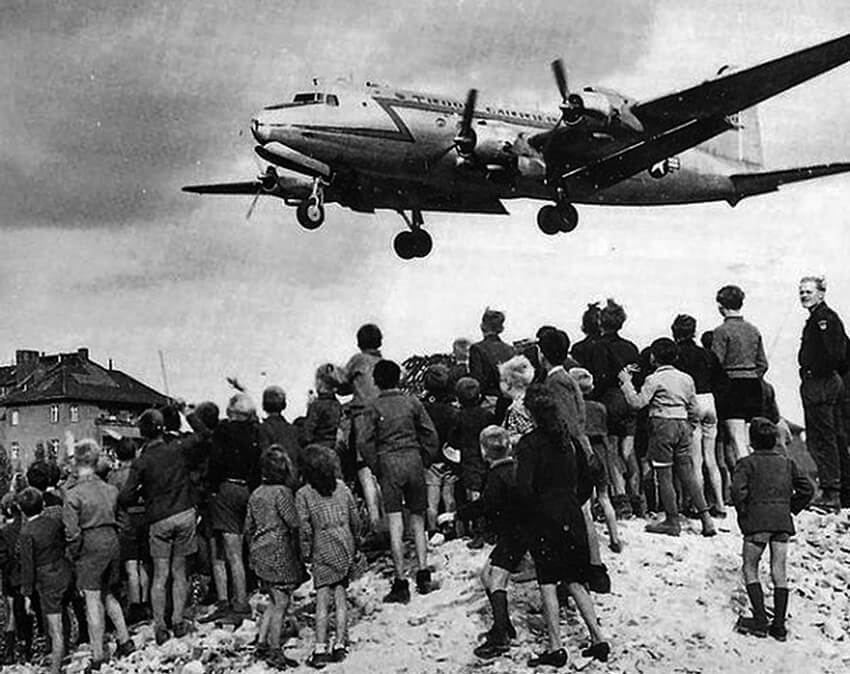 After the excitement of that first candy drop, Halvorsen continued to make drops to the growing number of children, and eventually other pilots participated too. The flights were given the name “Operation Little Vittles.” By the end of the missions, over three tons of candy were dropped over Berlin, and Halvorsen became the most recognized pilot of the Berlin Airlift for his generous act.

Operation Little Vittles, in particular, had an enormous impact on the German perception of Americans. When asked if she understood the gravity of the entire Berlin Airlift at the time, Edmonds said, “We were 3 million people starving to death. I was a child and they were dropping candy. [The realization] came later on.”

Crystal Sidwell, Senior Administrative Specialist at the Dare County Regional Airport, says there is a great turnout each year to Manteo’s airport, and she isn’t just talking about the kids; she hasn’t missed a single year either. She says anyone you ask about the candy drop will surely mention Karen Edmonds. 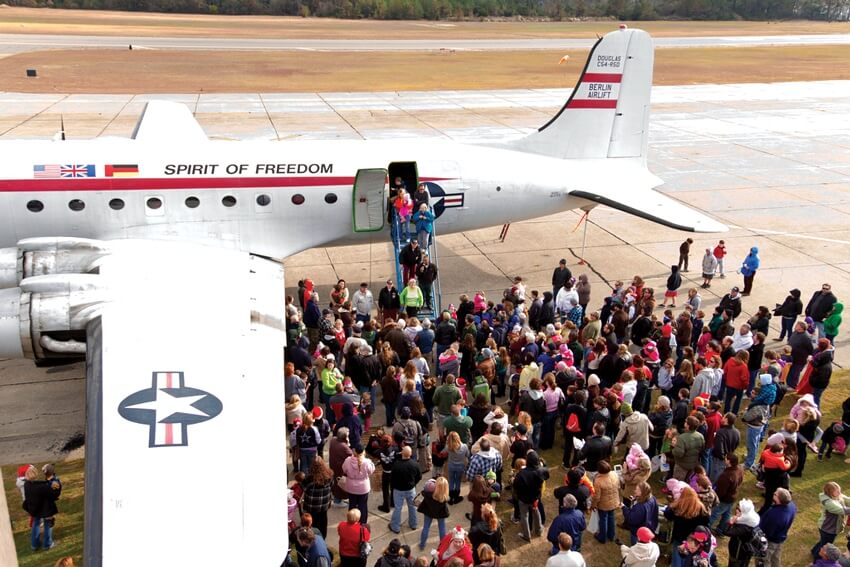 Spectators of the 2010 Manteo event gather around the aircraft as the passengers deplane following the candy drop.

“She puts together all of the candy and cupcakes and everything, the little gifts,” said Sidwell. “She goes around and gets donations from different places for the kids. She is really amazing.”

The candy drop portion of the event is entirely made possible by donations from local businesses, all signed on by Edmonds. This year Edmonds plans to have a total of 600 candy parachutes for the children in addition to the gifts and candy bags from Santa. She prepares the candy herself, sometimes with the help of family members, and additionally makes around 900 homemade treats.

The Manteo flyover and candy drop turns 15 this year and has occurred every December since 1999 – with one exception. Edmonds said, “One year we couldn’t make the candy drop from the air because it was too rainy, so we just dropped the candy parachutes out of the [parked airplane’s] windows. It’s not the same as when it comes out of the sky, believe me.”

At the 2011 candy drop at the Dare County Regional Airport, candy parachutes fall from the Spirit of Freedom to the children waiting on the ground. 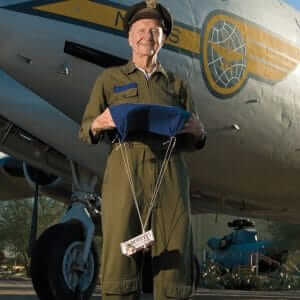 Gail Halvorsen holds a parachute soon to be dropped from the plane.

Tim Chopp, president and sole founder of the foundation, is the aircraft commander of the Spirit of Freedom, the plane that drops candy over Manteo each year. The candy drop in December will be Chopp’s 507th event piloting the Spirit of Freedom. He believes the public needs to remember the Berlin Airlift and particularly what people were willing to do to overcome adversity. Chopp flies all over the United States at events recognizing the Berlin Airlift. 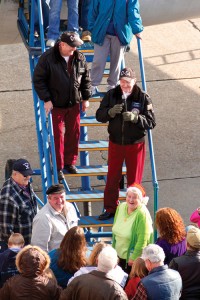 Gail Halvorsen speaks to the crowd as he descends the stairs from the plane, following Karen Edmonds.

“It was all very fascinating to me even as a young boy,” Chopp said. “At six years old I was looking at a magazine and fell in love with the C-54.” The Spirit of Freedom, named in honor of the liberated Berliners, is a Douglas C-54E transport aircraft. It is painted to represent the 48th Troop Carrier Squadron, one of the many groups that participated in the Berlin Airlift. Chopp, too, is quick to recognize the amazing effort put forth by Edmonds, as well as the Dare County Airport.

“Karen Edmonds, she is the key person,” Chopp said. “She is our God-sent angel. She does way above and beyond the call of duty.”

The Manteo candy drop is part of the foundation’s annual “Celebrating Christmas the Wright Way,” a five-day event that includes educational tours of the aircraft for public schools and a flight over the Wright Brothers National Memorial on December 17.

The Candy Bomber usually does a 1:00 pm candy drop for children ages 6 and under, followed by the 1:15 pm candy drop for children ages 7 and up. After landing, Santa Claus will deplane with children’s gifts and additional candy and will then be available for photos. Children and their families are invited to board the aircraft which has been converted into a museum. While inside, visitors will find artifacts, displays, and information showcasing the history of the Berlin Airlift. This event is free to the public.

“We’re very proud that this relationship has lasted this long,” Chopp said of the event. “We made many good friends over the years. The historic atmosphere and the history of the Outer Banks is great to return to. This is our Christmas coming here and bringing The Candy Bomber.” ♦

Born between the ocean and sound on North Carolina’s Outer Banks, Alexi Holian can’t remember a time when she wasn’t writing. Along with contributing to island publications like My Outer Banks Home, The Outer Banks Wedding Guide, and Outer Banks This Week, she has covered everything from Miami food festivals to St. Barth sailing for travel and hospitality brands around the world. 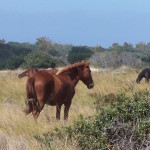 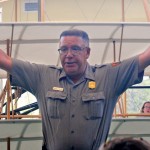