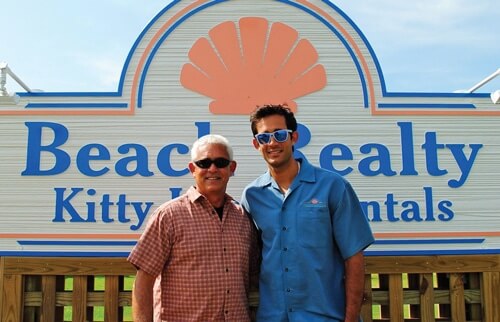 Celebrating a half century in the full-service real estate business is an accomplishment anywhere but reaching that milestone while located on the changing dunes of the Outer Banks is especially noteworthy. Beach Realty has reached its 50th anniversary and now has an inventory of almost 500 vacation homes to offer from Carova Beach to Nags Head. With four offices located in Kitty Hawk, Duck and Corolla, they now employ almost 70 realtors, property managers, contractors and remodelers. Beach Realty had humble beginnings in 1964 in the living room of Tom and Marge Cafferty’s cottage on the beach road and is now owned by the Ward family. Newcomers to the Outer Banks may find it hard to believe that it wasn’t long ago that vacationers had never heard of a place called ‘Duck.’ Beach Realty was the first to offer rentals there in 1966.  Always ready for new challenges, Beach has now started offering vacation rentals in the 4-wheel drive area of Carova Beach. Beach Realty also gives back to its home community and has been supporting the Outer Banks Relief Foundation since its inception with financial donations, volunteer hours and public awareness campaigns. beachrealtync.com
[divider] 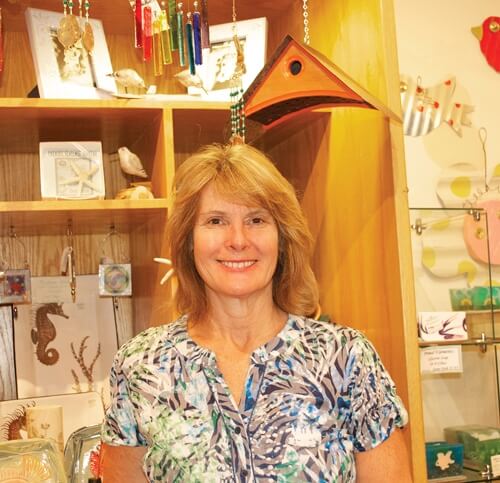 When asked for the secret behind the success of Tar Heel Trading Company, owner Judy Joyce describes a process that begins with the buying trips. She explains, “The first criteria is to find American-made pieces that are both quality craftsmanship and functional design. The next criteria is to try to make sure that they are not sold anywhere else on the Outer Banks.” She added, “When I go on a buying trip, I meet the artists and the crafters. So later, when I look at a piece in the store, I’m seeing the person behind it, not just the object.” There are over 200 artists represented each year in her Duck and Corolla stores so that’s a lot of personal touches. When it comes to the storefront operations, Joyce claims, “It’s all about the training.” She said that a lot of time is spent training the staff about unique aspects of each piece so that when customers are drawn to a piece, they will learn about the technique, the materials and the history of the item and artist. With all of that training, it also makes sense to keep the same knowledgeable staff from year to year. In fact, when naming the people who work for her, the first four names she lists have been there for more than 20 years (certainly, an oddity in this land of college students who are filling their summers with beachside employment). It all adds up to a formula that has meant 35 years of success for Judy and her husband, Jack. tarheeltrading.com [divider] 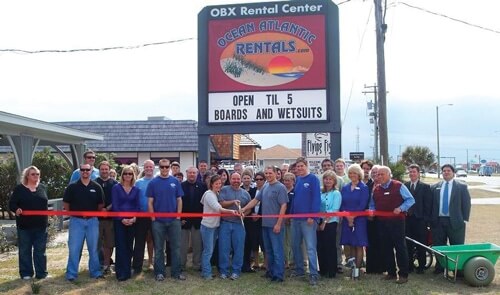 Greg and Eden Honeycutt had the foresight in 1979 to start renting a few beach chairs, boogie boards, and the occasional appliance to visitors vacationing on the Outer Banks.  What began as renting a few supplies out of their home has grown to four store locations and several distribution warehouses throughout Currituck and Dare counties. In 2004, Ocean Atlantic joined the growing wedding industry and began offering tables, chairs, tents, linens and even sound systems, staging and special occasion backdrops. Chris Marik, a 23-year veteran at OAR, and a general manager and part owner of Ocean Atlantic said “even before social media, we were listening to our customers and responding. It doesn’t take too many times hearing the same request before we get it.” Based on customer demand, items like kayaks, all-terrain baby joggers, beach carts with balloon tires and corn-hole games were incorporated into their standard rental supplies and are now some of the most requested items.  Still a family-run small business, OAR is a strong supporter of the local community and continues to “give back” to the community by contributing over $12,000 to charitable causes annually. OAR now offers delivery service of over 80 items per week, 7 days a week, from Corova Beach to Hatteras Island. oceanatlanticrentals.com [divider] 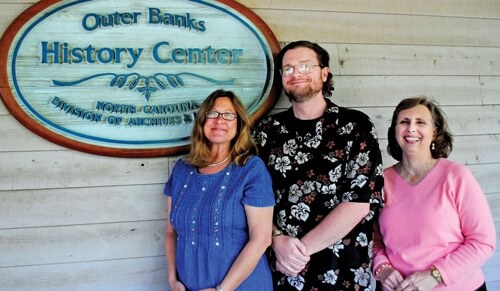 What started as one man’s research project on shipwrecks of the Outer Banks resulted in a 6,700 square foot history center on Roanoke Island now celebrating its 25th year. In the late 1940s, David Stick was traveling regularly to the library at the Mariner’s Museum in Newport News, Virginia while writing his now-famous book, Graveyard of the Atlantic. In order to save some travel time, he purchased many of the lifesaving reports and rare documents from maritime booksellers and kept them in his home library. A simple question asked of him, “what will happen to all of this when you die?” led him to bequeath (even twenty years before his passing), the entire collection to the North Carolina Division of Archives and History for what would later become the Outer Banks History Center in Manteo. His desire? To house his collection in a single location in Dare County to avoid having it parsed out to multiple facilities after he died. Today, Sarah Downing, assistant curator, says that the center serves a wide variety of interests and curiosities. Some frequent requests:  “I remember this old motor lodge we used to stay in when I was growing up; do you have any pictures of that?” Or, “I want to see if my bloodlines go back to Virginia Dare (this country’s first English child born in America).” Other popular searches include historic postcards of restaurants and landmarks, local Channel 12 commercials from the 80s and 90s and oral history recordings that freeze local lore and accents for posterity. The state’s drive to digitize the collection has initiated a Flickr site that gives potential visitors a small preview of what’s in store including tens of thousands of Aycock Brown photos. Come and see for yourself why others have said, “stepping in here feels like a homecoming.” [divider] 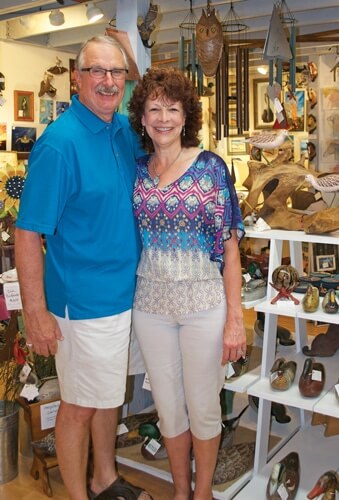 Originally opened in 1989, the Wooden Feather has celebrated 25 years of success on the Outer Banks. Prior to purchasing the home accent shop in 2009, Cathy Bitterman’s work kept her ‘on the road’ making sales in New York City for the publishing industry. “I’ve always dealt with art, artists and graphic designers,” so it was logical to continue working with art,” Cathy says. She and her husband Bill go on about five buying trips each year to bring the work of over 80 artists to their popular Scarborough Lane shop in Duck. The primary focus showcases Outer Banks beaches and wildlife: anything indigenous like pelicans, turtles, sanderlings and wild horses are represented. What is popular in the store changes frequently, “One week it’s sandpipers; the next week it’s pelicans. My guess is to attribute it to what’s showing up on the beach that week,” states Cathy. She adds, “Our customers are typically either looking for something to remind them of their vacation here or they realize that they won’t be able to find anything like this back home, so they decide to pick up a Christmas gift” that is an original piece. The same customers return predictably during the same summer months as previous years. Cathy says, “We can tell that people have us on their list of ‘things to do’ while they’re here and that gives us a warm, fuzzy feeling.” woodenfeather.com [divider]

A foggy photograph of a tree line in Lake Mattamuskeet was chosen by an international panel of 15 professional photographer jurors as Team USA’s Gold Medal winner in the World Photographic Cup. Yellowhouse Gallery owner, Eve Turek took the prize while only three images in each of six categories could be entered per country. “I got up well before daylight to photograph the sunrise at Lake Mattamuskeet. I was imagining golds and oranges and pinks, but there was no color in the sky or water at all.  The fog obscured everything. Eventually there was enough light to photograph by, and I was mesmerized by these trees in the lake and the fog. The fog turned out to be the gift,” she said. Incredibly, Turek did not know her image had even been selected to compete until after the Professional Photographers Association (PPA) announced the winners at their annual convention. Out of all of PPA’s Grand Imaging Award winners, Turek’s “Meditation,” was one of the three chosen to represent the United States in the Landscape category. Eve and her husband, Pete, own Yellowhouse Gallery and Gifts in Croatan Centre at milepost 13.5 on the Bypass in Nags Head. They moved the gallery from its historic Beach Road location at the end of 2013.
[divider] 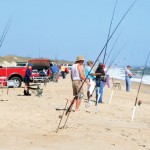