All it takes is one conversation with Lisa Brickhouse to showcase her exuberant nature. She frenetically flies from sentence to sentence. She throws in character voices – New York City wiseguy, Southern belle – for emphasis in her storytelling. It’s everything you’d expect out of a local radio personality with 20-plus years in the business. 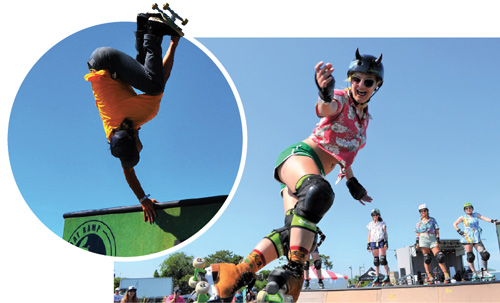 Lurking just below the surface, though, is a whole other side of Brickhouse. Her eyes glisten with tears when she speaks of her “friends,” of people all too often marginalized because of special needs, of childhood memories that seemed insignificant at the time but eventually would lay the foundation for a community-wide celebration.

When Brickhouse starts talking about Shred Fest, she shreds the stereotype of brash radio personality – mostly. Don’t get her started on the name.

“We shred guitars, we shred skateboards, we shred bikes, we shred the ramp,” Brickhouse says. “My friends who are World War II vets still think that we’re shredding paper, and I want to get a ‘Shred-X’ out there just for (giggles) to have on-site for when people roll up with all their old papers. I have people who are like, ‘You need to change the name.’ I’m like, ‘No, you need to get hipper. Like, Google it.’ ” 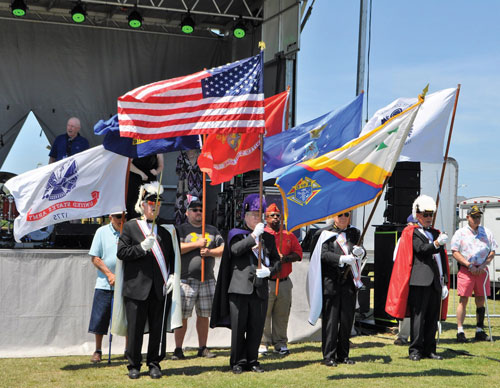 Your chance to get hip comes Saturday, May 16, at the Soundside Event Site in Nags Head. This year marks the fifth annual Dare2Care OBX Shred

Fest, and Brickhouse is eager to make the day bigger than ever.

Gates open at 1:30 and the event begins at 2 with a celebration of veterans. (The third Saturday of May was chosen because it’s Armed Forces Day.) Then comes the shredding: Local musicians such as – you guessed it – The Shredders take to the stage along with a variety of other bands on two stages.

From open to close at 8:30, extreme athletes hit the vert ramp that Brickhouse brings in from Florida. Chicks in Bowls (CIB) is a professional women’s roller derby team that thrills the crowd. Local BMX riders like Chuck Hargis, local pro skateboarder Jesse Davis – Brickhouse’s husband – up-and-coming stars like Jason Gutierrez from Virginia and others dazzle with their tricks and flips.

“Everyone says it’s the best time they’ve ever had,” Brickhouse says of the reaction she gets from the crowd. “Literally, people haven’t seen stuff like BMX riders going 10 feet above the ramp. Kids see it playing video games, they see it on TV, but they haven’t really had that in their face.”

The trick for year five is getting more and more people to enjoy the event. Brickhouse and her friend, Renate Macchirole, combined their passions for working with special needs people and music to create the Dare2Care OBX Shred Fest. Prior to her death in 2018, Macchirole had worked with Special Olympics, Room in the Inn and other local groups: “We just thought it would be the most magical thing in the world to celebrate these communities,” Brickhouse recalls.

They had the perfect name for their mix of music and extreme sports – the OBX Games – but that turned out to be a little TOO clever and too close to the real X Games. Thus, Dare2Care OBX Shred Fest was born.

“Music obviously is something I’m passionate about. I’m not creative enough to play or sing, so I promote other people that are,” says Brickhouse, an on-air personality and account executive with JAM Media. “I have worked with special needs folks here in Dare County for over a decade, and just having the pleasure of hanging out with my friends whenever a cool song comes on and they just want to get up and dance and party down and enjoy it.” 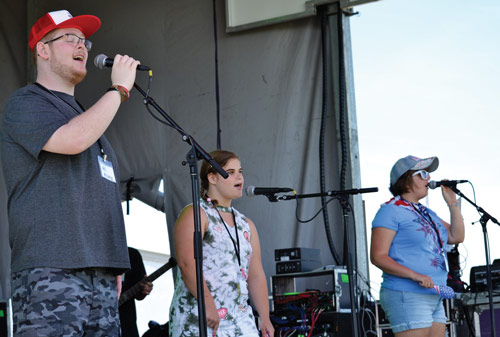 “I was really nervous to start with,” Josh says of their debut performance a few years ago. “There were so many people – it was a huge crowd. It was really fun, a really cool experience being able to put myself out there.”

As much fun as they have performing, their “rock star” treatment in the green room after the set – wearing their VIP passes, sipping bottled water with the extreme athletes, signing autographs – provides another huge boost.

“They get a little cocky,” Brickhouse says with a laugh. “They think they’re way too big rock stars – they deserve to be. It’s a very surreal but totally awesome feeling. And the thing that is the best is the families of those folks, the parents say things like, ‘They never felt like they were accepted and a part of anything until you gave them this opportunity.’ ”

This year’s event also will include The Resilient, a band comprised of wounded veterans who will inspire the audience and tie together Shred Fest’s mission of promoting music in the special needs and veterans communities. Tickets for the day are $10 for students, active military, and veterans, or $20 for general admission, with family packs available for $50. Art vendors, food vendors, a family fun zone with the Children and Youth Partnership, and a raffle run by College of the Albemarle with big-ticket items for $10 a ticket are all part of the event.

Sponsors help offset the costs of running the show, but Brickhouse is always looking for more support both financially and with volunteers (reach out to her at lisadabrick@gmail.com).
So what makes Shred Fest such a worthy cause? This event actually helps keep the music playing all year. Brickhouse runs Shred Fest in partnership with the Motu Music Foundation, whose mission is to provide music lessons for anybody and everybody. That includes folks in the special needs community and music programs for veterans thanks to the hard work of Gates and Wyland, with money from Shred Fest providing lessons, instruments and other special events – The Shredders, for instance, have taken part in shows at the Outer Banks Brewing Station and Paparazzi.

“These are the two communities that everybody – no matter political, religious – you can always hear people say, ‘I support our special needs folks, and I support our veterans,” Brickhouse says. “It kind of gives a sense of ‘everybody is created equal’ with that love of music, wanting to just celebrate life.”

Brickhouse often gets asked if she can pinpoint a moment that led her down this path of helping people with special needs.

Growing up, she had a great-uncle who was a deaf-mute, and Brickhouse remembers her family establishing ways to communicate and laugh with him: “He was special because he was cool.” As a teenager, she had a neighbor with special needs that she would hang out with and listen to music with to help her calm down.

Brickhouse’s mom often took her to area nursing homes to paint fingernails and do arts and crafts with the residents. In later years, she watched her dad battle through throat cancer yet still “forge on every day, slick his hair back and put his man jewelry on, tuck in his shirt, wear his fancy man shoes – always look nice despite the fact he suffered.”

Her dad, her great-uncle, her neighbor, those elderly women in the nursing home, folks in our community with a wide array of special needs – all the kinds of people who get overlooked because they look different. 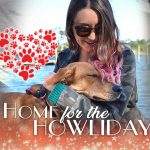