St. Andrew’s by the Sea

Imagine walking across high and hot sand dunes in your best Sunday clothes – Sunday clothes that include high collars and long pants and skirts. The soft sand sinks below your feet and the sun blazes hot on your back. These are the conditions that visitors to the Outer Banks experienced when they went to church every Sunday ninety-nine years ago. In 1916, when the Outer Banks lay barren and desolate for much of the year, one building that remained active was St. Andrew’s by-the-Sea Episcopal Church.

However, some would say St. Andrew’s story begins long before 1916. They will pose that the story of a church presence began as early as 1587 when the Lost Colony arrived on Roanoke Island and then mysteriously disappeared. 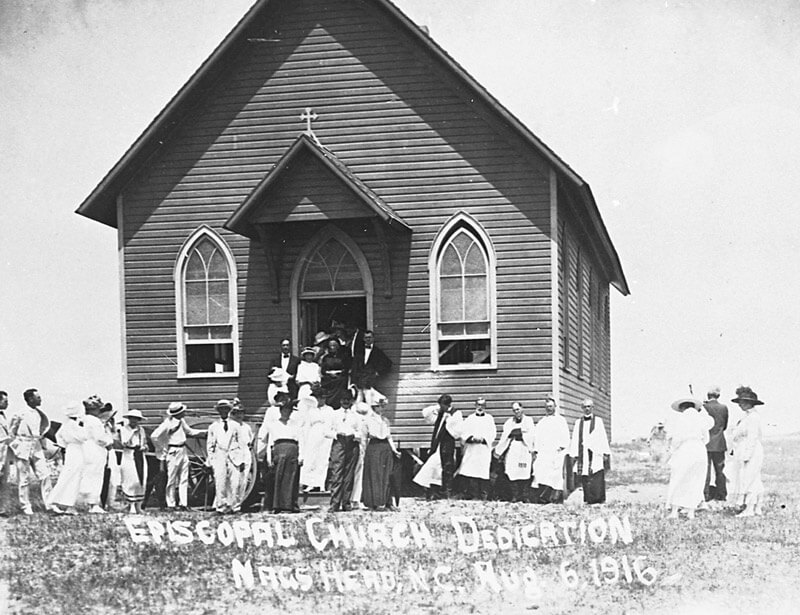 It wouldn’t be until 1849 that a permanent church was established on the Outer Banks. That church was conveniently located near the docks on the sound side of Nags Head where vacationers would arrive by boat; it was called All Saints’ House of Prayer. The majority of early homeowners were from Elizabeth City and Edenton, NC. They would pack up the family and their summer essentials which included food, water, and some livestock, and set out for the Outer Banks on a barge or in individual boats. These vacationers traveled the intra-coastal waterways and sound waters to vacation on the breezy beaches during summer months.

The Civil War came to the barely-touched Outer Banks when Confederate soldiers began to privateer off Hatteras Island in 1861. Union soldiers took Roanoke Island and used the Nags Head Hotel as their headquarters during the Battle of Roanoke Island in 1862. According to Edward Outlaw Jr., author of the 1950s book titled Old Nags Head, the All Saints’ chapel was torn down by Union troops under General Burnside. Confederate soldiers also contributed to its demise and destroyed other Nags Head homes and landmarks as they retreated. The lumber from the destroyed church went on to be used as shelters for former slaves who took refuge on the Union-controlled Roanoke Island.

The church wasn’t the only building destroyed in the war; many cottages and the Nags Head Hotel were destroyed as well. After the war, a new hotel and cottages were built, some even on the oceanfront, but it would be years until a new church was built on the beach. 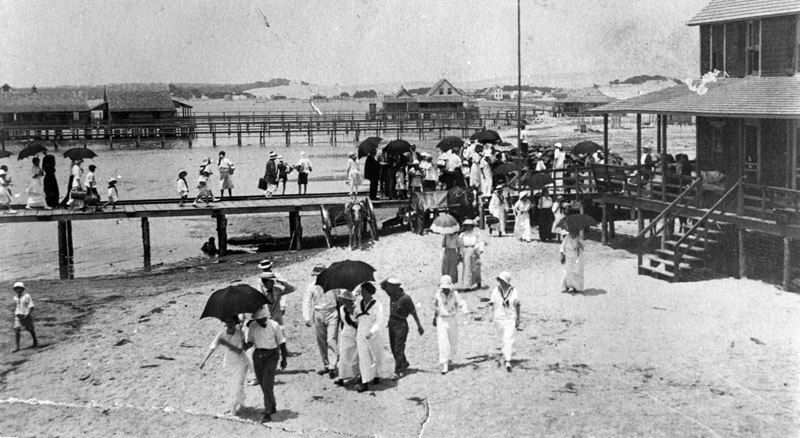 In 1916, after congregating for nearly fifty years on the porches of cottages and the new Nags Head Hotel, a new chapel was constructed on the soundfront near Seven Sisters hill, a group of sand dunes used as a landmark by local bankers. With the help of Congress to pay for the loss of the church in the Civil War, an impressive $700 was given to build a new church.

The parishioners brought in Stephen J. Twine, a “small and wiry” man, to build the chapel. Twine designed and built many of the cottages around St. Andrew’s from the early 1900s including many of the unpainted cottages that are still standing in the Old Nags Head Cottage Row today. The chapel mirrored his trademark designs with wooden pilings, steep pitched roofs and dormers, cedar shingles, porch-mounted benches, and top-hinged shutters.

The parishioners gave clear specifications for what the church should look like. In Twine’s contract, it stated that the church would be, “twenty-five feet wide and fifty feet long with five windows on each long side. Two windows on the west and one large window in the east.” For his work, Twine was paid $327.50.

This new church was built on the same low-lying area where the original All Saints’ chapel was built in 1916. Sitting in the middle of a cow pasture, the desolate chapel proved to be a trek for the parishioners coming from many scattered cottages. 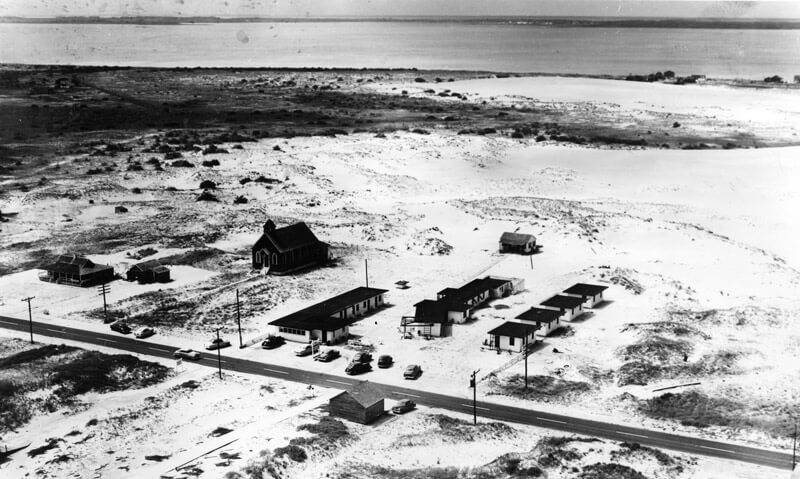 St. Andrew’s by-the-Sea is near the center of this aerial photograph of Nags Head in the early 1950s. Photo courtesy Outer Banks History Center.

In a video made for the 100th anniversary, several original parishioners were interviewed about the early church. Frances Drane Inglis, the granddaughter of the original priest, Dr. Robert Drane, said that as children, they would walk to church barefoot and then dust their feet off before they entered the chapel.

Going to church was also an adventure for Tom Skinner. He described having to walk over the sand and “watch out for the bull” in the valley of cows surrounding the church. He told how the bull chased a few of his friends and they took refuge on top of the church’s outhouse. The cows around the church also provided in-church entertainment as Betty Crawford remembered sitting in church with the windows wide open when a cow “poked her head right through the window” seemingly interested in the Sunday morning message.

Being in a low-lying area, the church would often gather water underneath the building when storms blew in. Tom Skinner remembered the times as a child when he and his friends would make paper sailboats and go under the church and play in the water while their parents were inside listening to the sermon.

The 1930s proved to be a difficult time; multiple hurricanes that blew across the Outer Banks caused massive damage and beach flooding, even some deaths. According to E.R. Outlaw, a summer resident claimed that winds and rain from a hurricane left the chapel with a “slight list.” 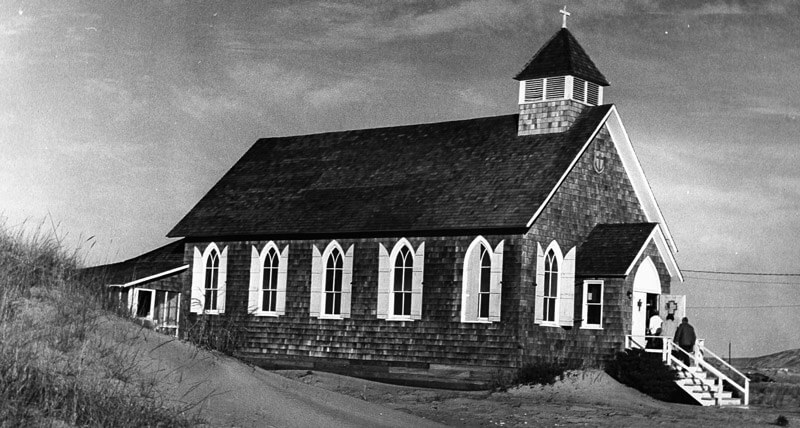 By the late 1930s, the Outer Banks was gaining popularity with vacationers and road construction began on what would soon be nicknamed the “beach road” that extends from Southern Shores to Nags Head. In response, the chapel was moved in 1937 due east as a more convenient location for those traveling the beach road. Today, the chapel can still be seen from its original location on Seven Sisters hill.

“Apparently, they moved it in the winter because we would have watched it move in the summer,” said Skinner. Not only was the church relocated, but it was also reoriented. Whereas the altar in the chapel originally faced the east with a large window behind it and the front entrance faced west, now the bright red doors on the front of the chapel face the east and the altar faces west.

Even though the chapel was moved closer to the road, it would be nearly twenty years until the church became a year-round church. Very few people lived year-round on the Outer Banks so the church was only used during the summer when the vacationers came.

During the summer seasons, a small apartment was built behind the chapel. Priests and their families from all over North Carolina and Virginia would come to the beach, have a small vacation during the week, and then give the message that Sunday. The church was not only used for spiritual gatherings, it was used for community meetings and events. If there was more than one event at a time, a curtain would simply be pulled in front of the altar to separate the two functions.

Over the years, there have been several changes to the small chapel. A belfry was added in 1937, and a bell that was salvaged from a Pasquotank County farm in Nixonton is still in use at St. Andrew’s today. “I’ve actually rung it before,” says Sarah Downing, a parishioner at the church today. In addition to the bell and belfry, a balcony and a porch were added later. 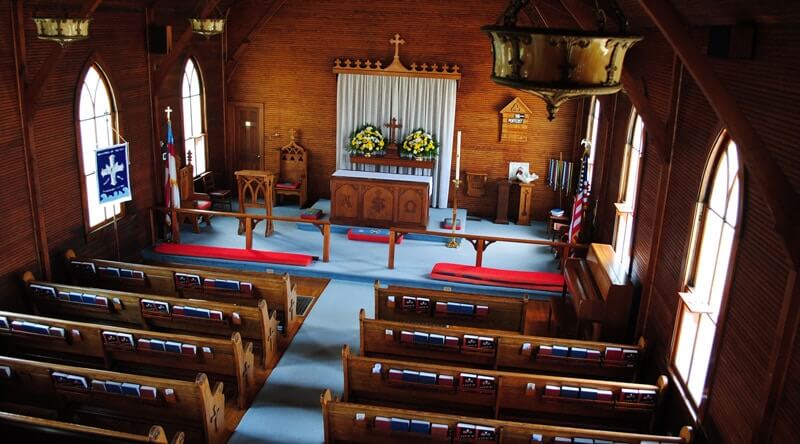 The interior of St. Andrew’s today. Photo by Allison Parrish.

By 2003, multiple buildings were added around the chapel to make room for a larger congregation. However, the small chapel is still used for the early Sunday morning service. “There’s still a tradition that you can’t put a modern twist on,” said Patti Johnson, church member.

For community outreach, the church has a servant ministry and works with other church groups. Some of these ministries include the preschool at the church, Ruthie’s Kitchen community dinner, and Room in the Inn, which provides shelter for the homeless during the winter. 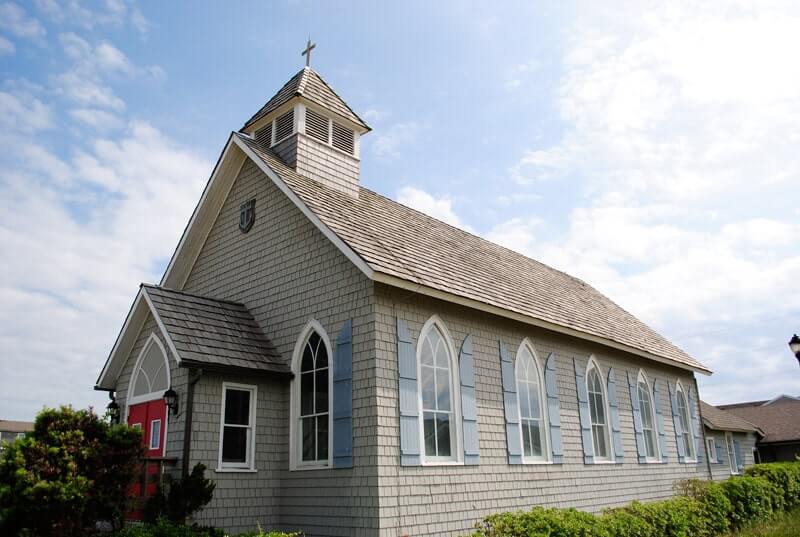 Frances Drane Inglis described the original chapel as a “fisherman’s chapel” inviting anyone to come and worship. The church has stood by that description for nearly 100 years as they call out, “fisherman, come as you are” to the little old church by the sea. ♦

Allison Parrish interned at Three Dog Ink in the summer of 2014 and is currently a senior studying photography and journalism at Gardner-Webb University in Boiling Springs, NC. After graduating in May, she hopes to work in the publishing industry while continuing to vacation and visit family here on the Outer Banks. 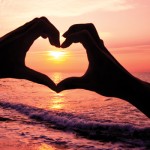 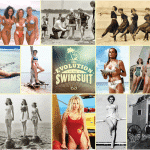 The Evolution Of The SwimsuitBack In The Day, Coastal Life, OBX Community