What To Love About an OBX Winter

There’s no truth to the rumor that the beloved Christmas hymn “In the Bleak Midwinter” was penned during a January nor’easter on the Outer Banks.

Renowned for its sand, sun and surf during the summer months and shoulder seasons, the OBX can turn mighty bleak in the harsher winter months of December, January and February. But for locals and visitors alike, beauty is in the eye of the beholder, and there’s plenty to love about those early sunsets, frosty mornings and stormy seas.

Coastal Life caught up with a few folks to find out what makes an Outer Banks winter special to them.

Natural Beauty Worth Flocking To
Some people may think an Outer Banks winter is for the birds. Susan Sawin would completely agree.

The owner of the Island Bookstore stores in Kitty Hawk, Duck and Corolla got her first taste of an Outer Banks winter in the mid ’70s before returning to live here full time in 2008. One day shortly after moving back, Sawin dropped off her kids at school and decided on a whim to take a drive to Hatteras.

She stopped at the Pea Island National Wildlife Refuge and discovered a whole other world.

Wintering birds by the thousands. A low sun glinting off the pools of water. Sea oats dancing in the crisp air.

“The marshlands, everything is just so beautiful. I really love being out there,” Sawin says.

She started visiting the nesting grounds regularly throughout the year and singing the praises of the Pea Island bird-watching experience to anyone – from locals to world travelers – who would listen. One of her favorite wintertime trips came while she served as the librarian at First Flight High School and played host to students and teachers in the China Partnership.

During that foreign exchange visit, Sawin took the Chinese teachers to Pea Island so they also could marvel at the beauty and solitude of an Outer Banks winter’s day.

“There was one pair of teachers that, because they’re from such a huge city, to be able to drive 30 minutes from school and be in what feels like the wilderness, they were amazed,” Sawin recalls. “They just loved it, and they did not want to leave.”

Much like the birds, who enjoy their winter here before finally resuming their annual migration routes each spring. 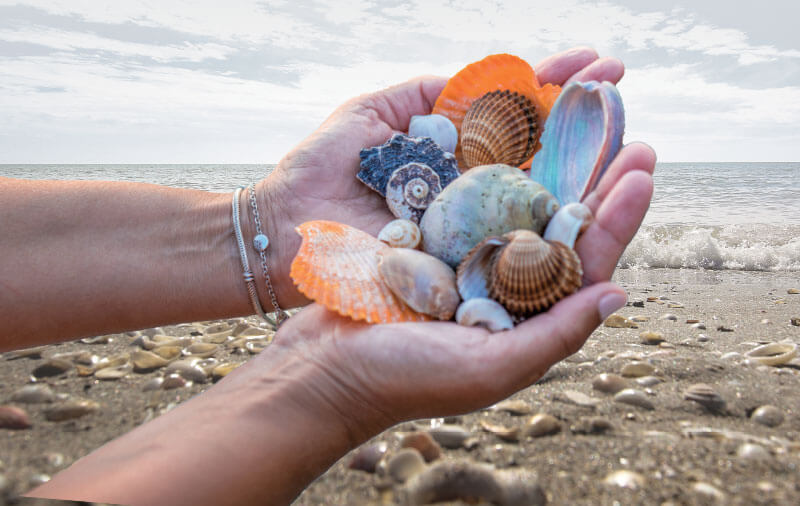 Hidden Treasures by the Handfuls
It’s a rite of passage that every summer beach trip ends with families toting home loads of shells and sand. A lucky few may even have plucked a piece of sea glass from the shoreline before crossing the bridge for the long ride home.

Quality shells and coveted sea glass are scarce in the summer, though, which is why Jessie McClary thrills at the hunt on cold winter mornings.

McClary has lived on the Outer Banks for 22 years. The First Flight High School digital arts teacher enjoys the beach year-round but reserves the winter months for seeking shells and grabbing sea glass.

Especially after a nor’easter, McClary searches spots from Carova to Corolla to Hayman Boulevard and Ocean Bay Boulevard in Kill Devil Hills for fabulous shells at low tide.

“The sand starts to go down to a ‘V’ shape, so when you’ve got that harsh churning right there, you can see everything tumbling over and literally run in there and grab it,” McClary explains. “They’ll just be scattered everywhere.”

The winter months are even more magical when it comes to finding sea glass. McClary loves a pair of options for that special hunt: driving onto the sand just before the sun comes up and shining your headlights down the beach or letting Mother Nature do her job and have the sun slowly spread its light.

McClary’s favorite find was a rare piece of cobalt blue that she had made into a necklace, while other pieces get put in a little jar in her bathroom.

“The jar keeps growing and it’s really cool, really fun – all those beautiful colors,” she says. 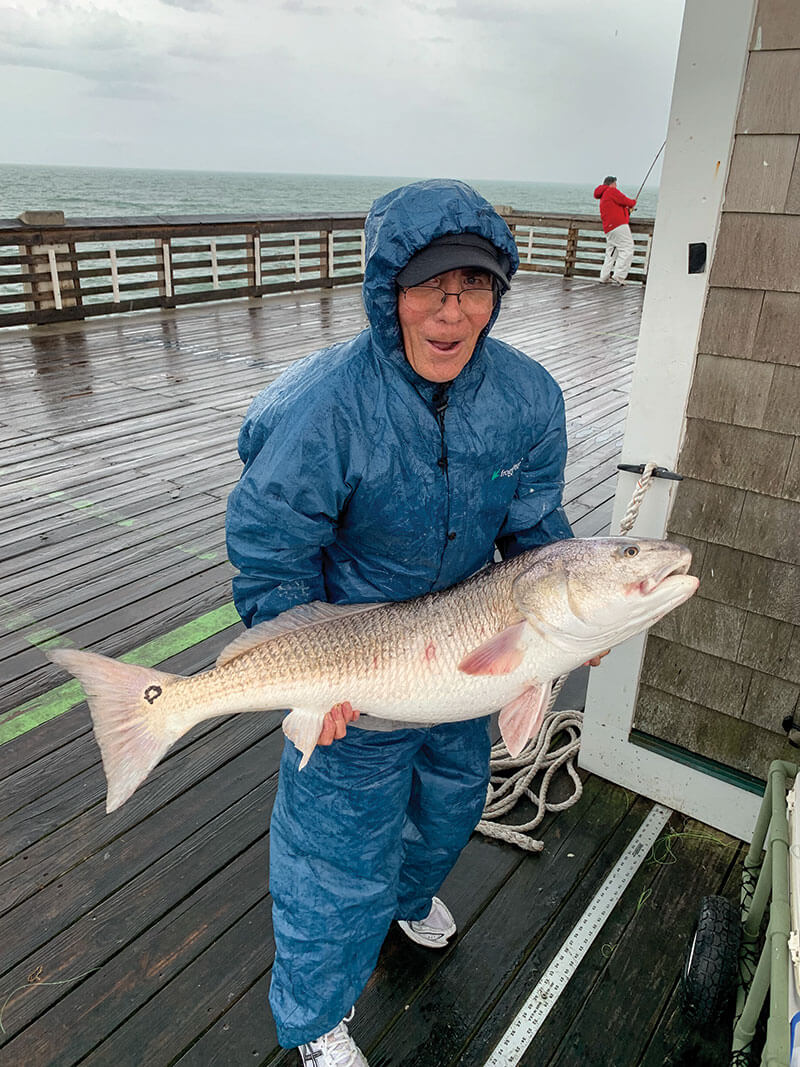 Starting the Day Off Right
Rick Probst and his wife, Yong, have only lived on the Outer Banks for nine years. So, you’ll have to excuse them if it seems like they’re making up for lost time.

Their goal? To see the sunrise at the beach. Every. Single. Morning. That includes the frigid winter months.

“She tries to get to every sunrise, and I go with her… when I’m not going fishing,” Rick says with a laugh. “Every sunrise is different. You never see the same one two times in a row and during the winter you’ve got the nice cool, crisp air that wakes you up.”

The Kill Devil Hills residents have collected a group of neighbors over the years who tend to enjoy that frosty first light together at Second Street. Every once in a while, if the wind is really blowing a gale, they’ll make an executive decision to at least shorten the daily visit.

“We’ll just stand back behind the dune until the sun comes up, run out and grab a couple of pictures and go home,” Rick says.

If he’s not watching the sunrise, it’s a safe bet you can find him at Jennette’s Pier wetting a line. Probst is a fixture at the pier, having taught fishing lessons to kids over the years, but the cold months are reserved for friends old and new.

“During the winter is when the older crowd comes after the younger generation leaves and you see some of the same people over and over, year after year,” he says. “You meet a lot of nice people fishing up on the pier. It’s less crowded and you’ve got more time to really just sit and watch what’s going on around you, instead of watching for the people that are trying to run over you.”

The fishing itself may not be primetime, but Rick says folks catch stuff every day, whether it’s skates or dogfish – he jokes that regulars at the pier hold an annual dogfish tournament each year on New Year’s Day with a potluck lunch afterward.

“At least you’re out there enjoying it and enjoying everybody’s company,” he says. “Very few times has the weather gotten too rough to keep us from going.”

Snowbirds at the Seashore
When Heather and Jim Claxton tell their friends in Charlotte that they’re headed to the OBX in November and December, the reaction is always the same.
“They don’t get it,” Heather says with a laugh.

Heather grew up with regular visits to the Outer Banks, and now she and Jim have a house in South Nags Head. Prior to the coronavirus pandemic, they always enjoyed leaving their home in Charlotte to visit during the fall and spring shoulder seasons. But working from home during Covid provided added flexibility, and the couple fell in love with the OBX winter experience.

The first thing they did on a cold, miserable November day was take a drive to Corolla.

“Nobody was there, we found the horses,” Heather recalls. “It was like one of those ‘legends of the Outer Banks’ kinds of days.”

One fun adventure after another followed. Jim rode his bike 46 miles from South Nags Head to Duck to celebrate his 46th birthday (try doing that in summer traffic!). They walked out to Cape Point and explored trails in Nags Head Woods: “It’s like you’re the only human beings alive out there and it’s beautiful,” Heather says.

Being around in winter also allowed them to enjoy some “locals” traditions, like catching Theatre of Dare performances, browsing for special finds at the Pea Island Art Gallery, and seeing Winter Lights at the Elizabethan Gardens. Oh, and eating like a local is pretty fun, too: no waits at places like Blue Water, Blue Moon, Food Dudes… “The chili at Kill Devil Grill…” Heather says, her voice trailing off at the mere memory.
Even the simple act of sitting on the porch with a cup of coffee or taking a break from a football game to watch the roiling waves of an angry ocean or decorating that live Christmas tree with oyster shells and then leaving it on the dune to become part of the living seashore – it’s all part of the magic of an OBX winter.

“It has its own beauty,” Heather says. “You’re not going for the sun. It’s kind of rough and rustic and not a lot of people get to experience it. It just feels authentic.” 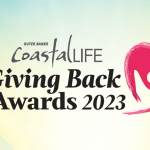