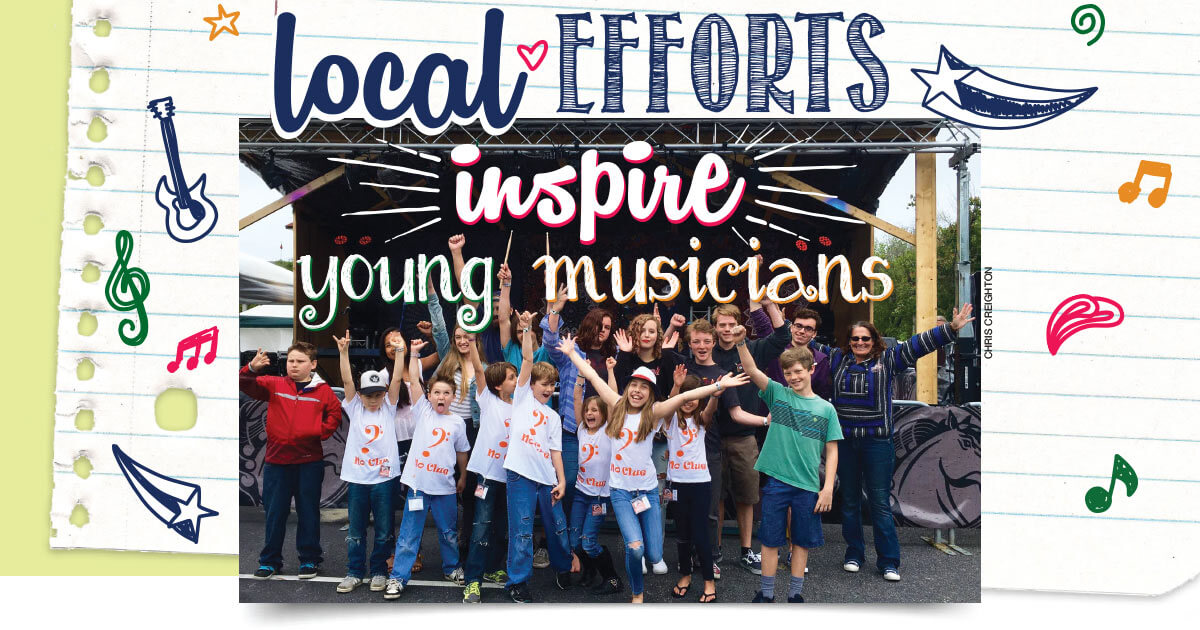 Musicians of the Mustang Outreach Program having fun together at the Mustang Spring Jam. Photo by Chris Creighton

On an early October evening in a makeshift Kitty Hawk second-floor studio, tenor saxophonist Alexandra Byers and four of her band mates work through their versions of the jazz standard “Birdland,” Stevie Wonder’s “Superstition,” and a funky number called “Arnge Drank,” all under the watchful eyes and ears of local blues master and teacher Ruth Wyand. 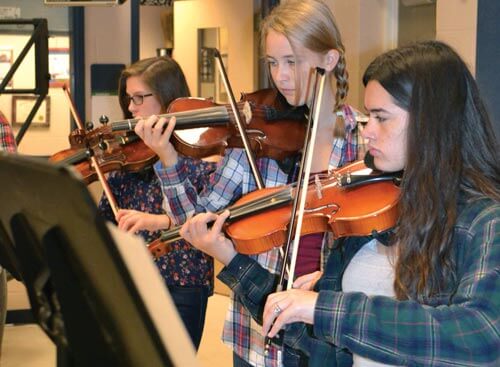 Violinists of the Dare County Youth Orchestra practice a piece outside of school hours. Photo by Michelle Wagner

Wyand offers tips and suggestions for a riff here, a measure there, but gives the musicians plenty of space to experiment. At one point, she even leaves the room for a few minutes during the hour-long session to allow the youngsters to play and to discuss the tunes without adult supervision.

“It gives them a chance to bond,” Wyand says of the First Flight High School students. “Basically, I’m here to coach and fine-tune.”

Twelve hours later, violinist Emmy Trivette and 13 of her schoolmates arrive at the First Flight High chorus room for a practice session. An hour before classes begin, Trivette and her friends shake off sleep and warm up on their violins, violas, cellos and bass. The students break off into smaller groups and rehearse parts of Bach’s Brandenburg Concerto No. 5 and several selections from “The Sound of Music” during the 35-minute session.

“They’re very dedicated about what they do,” says high school chorus leader and strings director John Buford, who supervises the four-days-per-week, before-school practices. “In a lot of ways, they inspire me.” 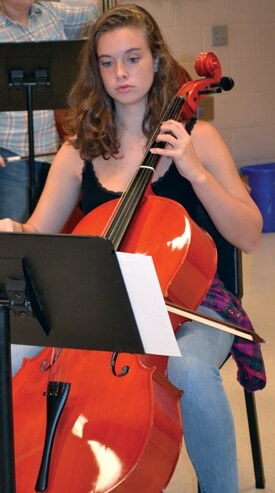 The two sessions represent a pair of local music efforts, the Mustang Outreach Program and the Dare County Youth Orchestra. The classically-oriented Dare County Youth Orchestra (DCYO) is a public-private partnership with DareCounty Schools, its mission to provide strings instruction to students throughout the county. It began in 2006 at First Flight Middle School, and has since expanded to include all county middle and high schools and most elementary schools.

The five-year-old Mustang program is essentially a School of Rock for kids from grade school through high school and the brainchild of local music promoter Mike Dianna. Both are non-profits that depend heavily on donations and volunteer efforts, and whose schedules mostly coincide with the academic year. Though practice timing and playlists vary widely, the aim is the same: to provide area youth with the opportunity to learn and to play music at a time when school systems often pare and cut fine arts and music budgets to save money.

“I’m a music person,” says Stephanie Baker, the Mustang program’s executive director and mother of two children in the program. “I see what it does for my kids and other kids. When you see kids able to get up on stage and perform in front of people, it’s an amazing experience.” People involved with both organizations speak of the benefits of music instruction to mind and body. For example, a 2012 study by Kansas University music education and therapy professor Christopher Johnson and the Center for Public Partnerships and Research of 6,000 grade-school students in the Nashville area found that those who participated in music programs outperformed their peers who did not in multiple areas: grade-point average; standardized test scores; graduation rate; attendance and discipline referrals. Studies have also suggested a link between music training and what are called executive function skills – the ability to adjust to changing tasks quickly and efficiently. “Musical instruction complements an education,” says Michael O’Dell, president of the DCYO. “Whether they’re expected to be on a professional stage or just to enjoy themselves on their back porch, if we’ve introduced and exposed children to instruction, where they have the comfortability for others or just for themselves, then we’ve accomplished our goal, and we think it’s fantastic.”

O’Dell is an amiable gent who speaks passionately and precisely, and prefers to focus attention on others. He and his family moved to the Outer Banks in 2005 from West Virginia, where he grew up in a musical family but inherited none of their aptitude. 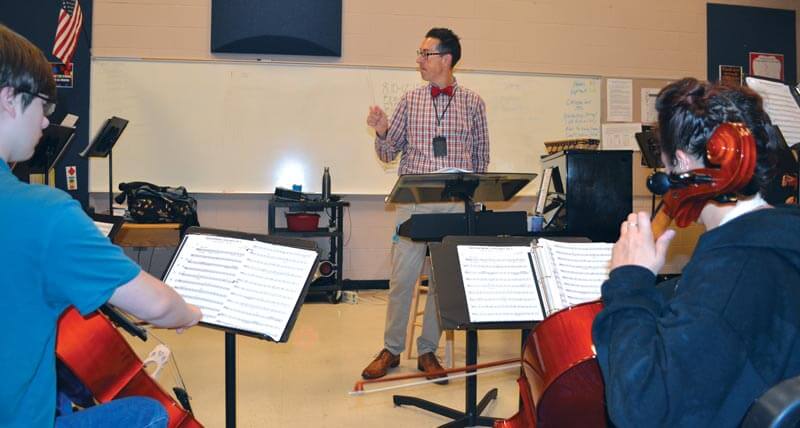 John Buford, chorus and strings director, leads the young group who he says inspires him. Photo by Michelle Wagner 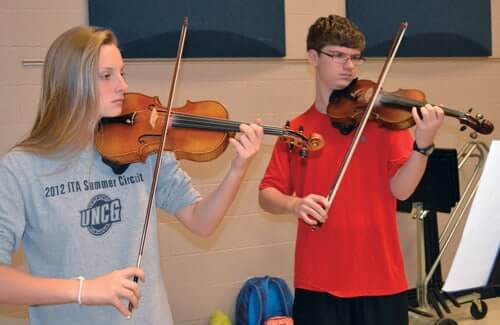 “I can play the radio,” he jokes. Still, he loves music and listens to everything from Mozart and madrigals to bebop and hip hop. All four of his children came through the DCYO, which led him to become involved with the organization.

“I’m not a natural performer, by any means,” says oldest daughter Katie O’Dell, who plays the violin and is 22. “But it’s something that I grew into and I grew to like. In middle school, I would have never dreamed of it. But by the end of high school, I was loving performing and being on stage and getting to show what we had accomplished, with all the time practicing. I liked the complicated runs and measures that you’d be doing, because you got to show everybody, ‘That actually sounds really good‘, as compared to when you were in middle school and it sounded horrible.”

Trivette and Byers say they are grateful for the relationships they’ve formed within their respective groups, as well as the opportunity to practice and play outside the confines of school or private lessons.

“Some of us are in the (First Flight) high school jazz band, so we play together a lot,” says Mac McClary, a keyboardist in Byers’ group. “But for students who don’t get an opportunity to play with other students, I think it’s great. As a young musician, it’s very important to be able to play with other people, learn how to play in a small group, how to improvise and everything that comes in with that.”

Trivette, a sophomore, has played violin since she was six and has been with the DCYO for the past four years. She also swims competitively, so her days are full and begin early.

“It’s been a good experience for me,” she says. “I didn’t know when I first started how it would work out, but it’s a good way for me to keep practicing when I wouldn’t always get the opportunity to do that.”

From Buford’s perspective, he said, “There’s something about playing with your peers that provides a different focus. It really changes the game for them, from practicing and playing solo to a team sport, so to speak. Like we always say, ‘The more the merrier, in music.’”

Ruth Wyland prepares all levels of musicians with varying degrees of experience to perform on stage.

The Mustang program this year has approximately 30 students, divided into small bands according to age and skill level. Wyand and local musician Amanda Williams, half of the duo Gypsea Souls, donate their time as the primary teachers and band mentors. It costs $15 per week for elementary and middle school students ($364.50 for the entire 27-week schedule), $10 per week for high school students ($243 for 27 weeks). High School students receive a reduced rate because they’re required to volunteer and mentor younger students for several hours per month. Students may apply for scholarships based on the state’s guidelines for the National School Lunch Program.
The DCYO has grown from a handful of middle school students to 150 throughout the county, with an annual budget of approximately $12,000. The group owns most of the instruments used by students, and Dare County Schools not only provide space, but also pay high school and middle school instructors, all of which help defray costs. The DCYO charges a $50 rental fee for instruments and $10 materials fee for middle and high school students. The school district also hosts the elementary school program, which began in 2015, however the DYCO pays those instructors. Elementary students pay $50 per semester. 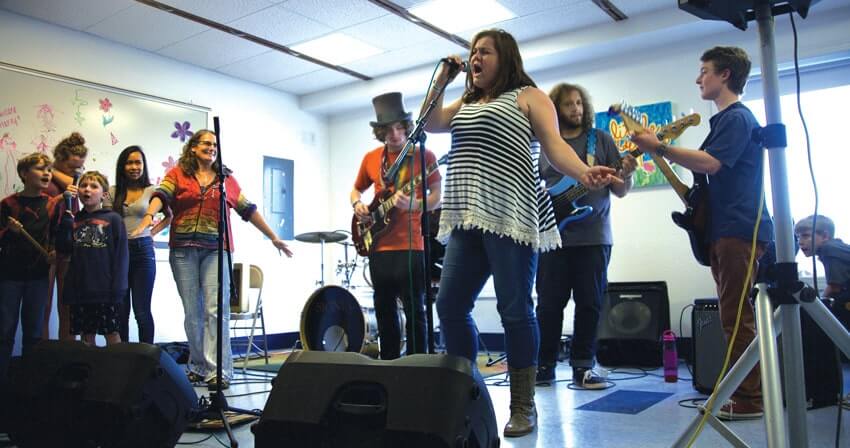 Mustang Outreach Program graduates Grace Deichler and Sam Wills perform with the People’s Blues of Richmond as Ruth Wyand conducts a few local schoolchildren on back up vocals.

Both programs regularly bring in outside talent to conduct workshops and seminars with students. DCYO’s past guests have included cellist Soo Bae and the chamber music group, PUBLIQuartet. Locally raised, Connecticut-based musician Becky Kessler of the indie duo Violent Mae, and People’s Blues of Richmond are among those who have worked with Mustang Outreach students. 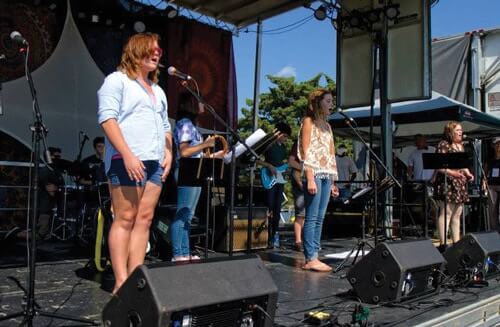 Local bands Static Attitude and Side Project were spawned by the Mustang program. Both played paying gigs around the area, including at the Outer Banks Brewing Station and Mike Dianna’s Grill Room. Outreach bands also were opening acts at Dianna’s annual Mustang Spring Jam and the larger Mustang Music Festival in the fall, a practice he hopes to continue when he revives the event next year.

Mustang program bands will play at several showcases and coffee houses through the winter and spring. The group aims for a Battle of the Bands fundraiser next spring. The DCYO has performances scheduled throughout the winter and spring, among them Handel’s “Messiah” in late November and a workshop and performance with members of the Virginia Symphony Orchestra next April.

“It really gives these kids the confidence to do so many things,” Baker says. “To watch a young kid get up on stage in front of so many other people and sing or play a song is inspiring. It lets them know that’s something they can do, and lets a lot of other kids know that maybe they can do it, too.”♦

Dave Fairbank is a freelance writer living in Kill Devil Hills. Dave was a sports writer for 30 years at the Newport News (Va.) Daily Press prior to relocating the the Outer Banks. 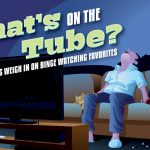 What’s on the Tube? Locals Weigh In On Binge Watching FavoritesOBX Community 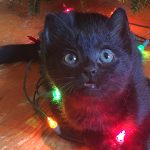