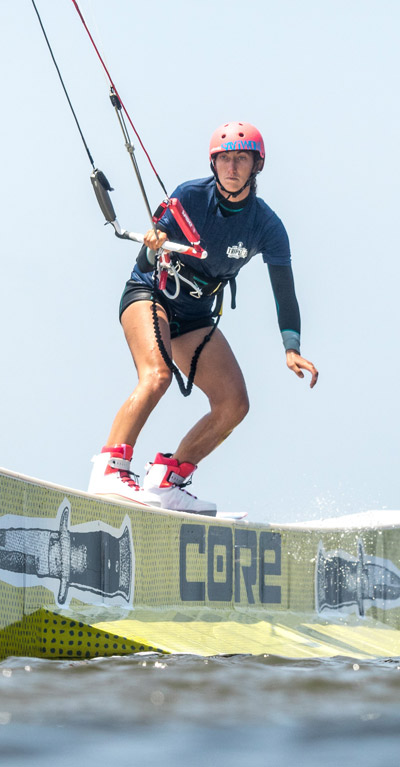 Thanks to consistent winds, shallow waters, and easily accessible waves on the surf and sound sides, the Outer Banks is a world class premier destination for kiteboarding. Right here in our own backyard we have one of the best places for beginners to learn and experts to come play. And yet, when Outer Banks kiteboarding guru Mariel Grossman competes in the annual Wind Voyager Triple-S Invitational kiteboarding competition at REAL Watersports in Waves, she’s usually one of the few locals out there.
Raised in Manteo, Grossman got her first invite to compete in the Triple-S last year, where she took 9th place. She was 8th this year. We caught up with Grossman right after she returned from competing in the Hood Jam Invitational in Oregon and asked her about competitions, teaching newbies for a living, and what it’s like to fly through the air strapped to a 20-foot kiteboard.

When did you get started kiteboarding?

The summer after third grade my Mom signed my twin brother up to go surfing and he liked it a lot. Because we’re twins, of course, one can’t do anything without the other wanting to. But on the Outer Banks, there’s so many days where it’s just too windy, blown out, and crazy to surf. I would see kiters going by and having the best time. I thought, “I should learn how to do that so I can get more sessions.” And slowly but surely it took over my life. But it’s great, and this place is perfect for it.

What makes the Outer Banks kiteboarding so perfect?

Oh, this is like in the Mecca of kiteboarding. Cape Hatteras sticks so far out in the ocean that we have consistent winds. You can find wind in any direction. So if you don’t mind driving a little bit, you can find the session that you’re looking for. Then we also have the sound, which is almost flat water— shallow, easy.

That must be good for when you’re teaching kiteboarding over at REAL Watersports.

Oh yeah. The sound is like a kiddie pool for boarding. The rate at which it takes to learn here is so much faster than everywhere else. Because you’re not dealing with deep water, you’re not dealing with currents. We get to follow you for miles downwind as you’re bombing, and we get to correct you from a jet ski. Most other places the instructors have to be onshore and so there’s no real clear communication. 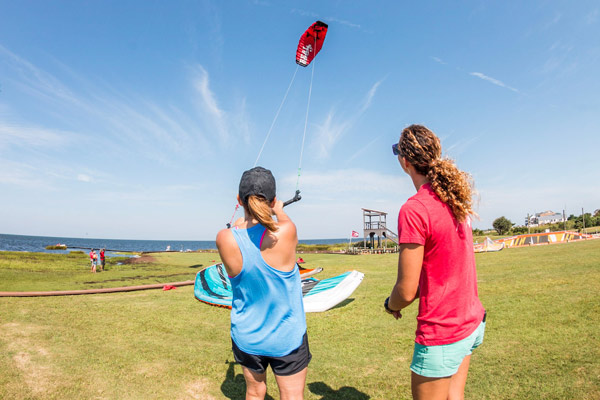 Mariel Grossman (right) is a kiteboarding instructor at REAL Watersports in Waves, NC on the Outer Banks.

One of my favorite things about teaching it is I get a lot of women and girls in. There’s just not that many other women out there competing. I’m glad to see more women learning. Kiteboarding is empowering. I love teaching middle school age kids because I think, especially for girls, it builds confidence and that’s so important.

Has kiteboarding improved your confidence?

I think surfing and kiting improved my confidence. It’s nice knowing that I can handle myself in any situation out there on the water. Anytime that you’re independent and self sufficient, it makes you more confident. More aware too.
I love it. It’s challenging some days, but it’s very rewarding as well. The thing about kiteboarding is that you can manipulate it to any sport you want, based on your background. So there’s snow kiting, there’s surf kiting, there’s land kiting, there’s flat waters. Then there’s sliders, which is like an obstacle you ride on and do different tricks. And ramps where it sends you off into the air, and you do tricks there as well.

It can be dangerous, right?

The sport itself is very safe, if you learn how to make it safe. You definitely want to get a good instructor, take a lesson, and get that guidance because you can get hurt. I’ve never gotten hurt seriously, but I don’t push the envelope too much. I play within my realm, and I slowly expand my comfort zones.
One time I was kiting in Paris. I was in the ocean side and I lost my board. The current was taking it away and I saw some sharks. That was terrifying. I just started singing; I sing to myself when I’m scared. I pushed through and I finally got my board back, but it took a lot.

What do you sing?

Tell me about the Triple-S.

Triple-S is huge and it’s so much fun. It’s the biggest competition in North America. Competitors come from all over the world. The winners this year got $12,000, and they’ve raised over $113,000 for the Hatteras Island Youth Education Fund. It’s called the Triple-S because it has slips, surf, and sliders. 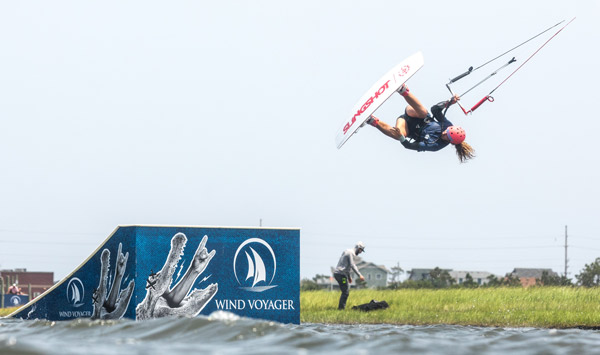 Mariel Grossman competing at Triple-S in Waves, NC on the Outer Banks.

I’m consistently second-to-last in every single competition out there. It’s a pretty big gap between someone like me and the pros. The pros, that’s their job. They’re sponsored and when they come here to compete, they’re here to win. They train 9am to 4pm on the water every day, dialing in tricks, and I’m like, “Oh, you guys look like you’re having fun, but I’m teaching today. That’s what I’m doing.” I do this as a hobby and somehow got into these competitions. But I have a great time doing it.

You must at least be close to the same level as the pros if you’re getting invited to these competitions.

You do have to be a certain level. There’s a couple of ways to be invited into the Triple-S. There’s a competition to get in, the Open. They take two women and two men. That’s how I got in. You can also be invited by the company. Or you can make a video of yourself riding and send it in. 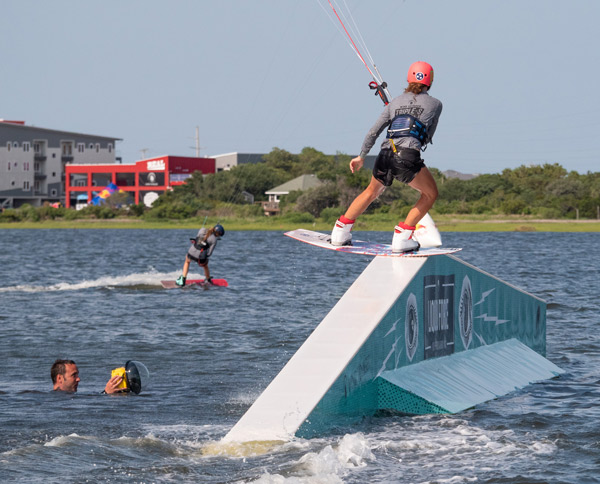 How did Hood Jam out in Oregon compare to Triple-S?

Oh, Hood River’s crazy. I’m used to here— where we have these perfect conditions, REAL has these amazing sliders that they put so much money in, and it’s all pristine flat water. Then I go to Hood River and it’s like the Wild West. The wind was gusty and it was on and off. It was cold water. It would be, “Oh the wind’s now four miles per hour and my kite’s falling out of the air.” And then, “Oh look, today I’m overpowered and it’s 35 miles an hour out here.” It definitely kept me on my toes. It was crazy and it was great. I was laughing the whole time.

So what do you do when you’re not competing and teaching?

I teach at REAL from March to November, and I take the rest of the time off and travel the world. This year my boyfriend and I did America and Africa. I went to NASCAR for the first time in Texas, did a cable park tour in Georgia, camped in Hawaii for a month and a half, kiting and surfing there. And then I went snowboarding in Colorado with some girlfriends. In Africa we kited and surfed in Morocco and Cape Town. We watched the Red Bull King of the Air competition there. I think Cape Town is my favorite spot to kite.

Honestly, I think my favorite stories are from coaching. My favorite moments are when people are getting frustrated. You can see that frustration building, and building, and building. And then for some reason or another we just work through it and they get it. They stand up for their first time. Or they do a long run. I just let them go forever and they’re so excited. It just feels so good for everybody involved. It’s a great feeling. ♦ 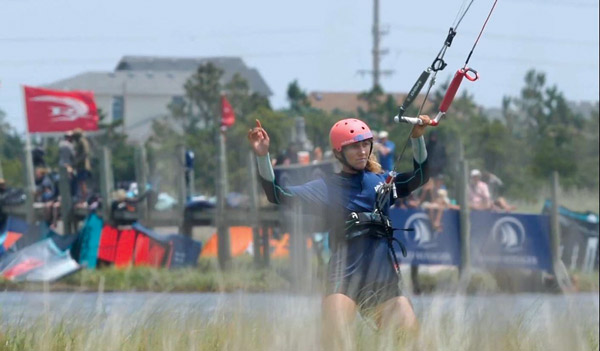 Find a sound side kiteboarding launch site in the Outer Banks at OBXBeachAccess.com

Katrina lives with her husband and their fearsome toddler. When she’s not writing, she prepares elaborate meals, cheats at video games, and plays the guitar (badly). 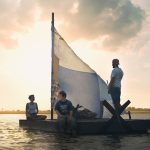 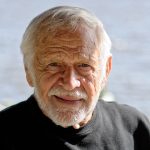