By Emily Moliken
Posted October 1, 2022
In Back In The Day, Something to Talk About
History Uncovered in Wanchese2022-10-012022-10-17https://outerbankscoastallife.com/wp-content/uploads/2022/11/obcl22-logo-new-bw.pngOuter Banks Coastal Lifehttps://outerbankscoastallife.com/wp-content/uploads/2022/10/obcl-wanchese-uncovered.png200px200px
0

Like so many Southern locales, this place, the Outer Banks, has a complicated history, simultaneously embracing and commodifying its past. To showcase or to preserve, to grow with the times or save days of yore in amber; is it best to allow the land to make money for the sake of the space or to leave the space to the wild? We know that here we tend to develop— to pack the shores to breaking point year in and year out, to build the house and leave it empty, cast the net, and hope it’s full. But we cannot assume we are the first to collect a bounty from this place. I say bounty, not booty, in an attempt to acknowledge some history and forego the swashbuckling part that adorns every storefront and graces the pages of the local novel. Long before the English came to stake their claim and a string of failed colonization attempts, the Outer Banks’ bountiful fisheries supplied the natives with oysters, shrimp, and wild fauna. And as local lore, the occasional descendant and stray placard will tell you; someone was here to collect. The proof is in the pudding, well, the marsh.

Today, Wanchese is the fishing hub of the Outer Banks, fulfilling a longtime legacy of foragers and fishermen using the elevated hammock of the land to their advantage. The area on the southern end of Roanoke Island is named for the last known ruler of the Roanoke, a member of the Secotan tribe who was one of the two Native Americans taken to England in 1584. The other was named Manteo. In 1886 Wanchese gained its name by establishing its first post office. Commercial fishing has been the area’s primary function since the establishment and later expansion of the Wanchese harbor. In the subsequent development of the harbor and its surrounding marshes and wetlands, one particular section of Wanchese on the north edge of the marshes some 1800 feet south of the harbor held enough historical significance and information to be preserved. This site, now known as the Tillett site or colloquially as “Thicket Lump,” has the key to not only Wanchese’s past going back as far as 8000-10,000 B.C. but human activity on the Outer Banks during the Archaic Period. 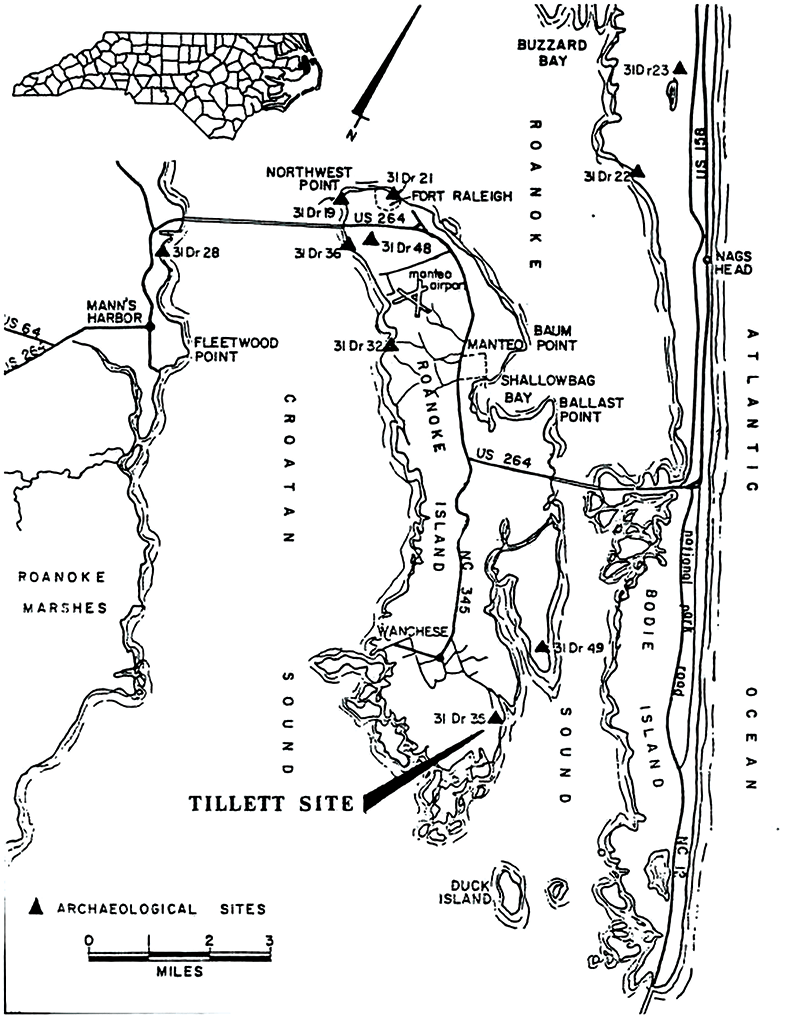 The Tillett site gets its current title from the last of its private landowners, Gilbert R. “Moon” Tillett of Wanchese. The last native inhabitants of the land were likely members of the Carolina Algonkian Roanoke society, the same group of native Carolinians encountered by the first English explorers to Roanoke Island in 1584. Experts know the land was inhabited by natives before its English settlers, as evidenced by the excavated shell mounds used as fertilizer and natural sources of lime to enrich the soil. “Information from local informants and preliminary studies of local collections obtained in and around Wanchese indicate occupations during the entire Archaic Period,” when the island was still connected to the mainland, says a 1984 archeological report published by the Archaeology Laboratory in the Department of Sociology, Anthropology and Economics at East Carolina University. Sites such as this one are numerous around the Banks. Still, the preservation of this rich history often is back burnered to economic opportunity. Much of the artifacts and burial sites found here in Wanchese have been destroyed in the careless development of the area, leaving little surviving to provide insights into our island’s past. At the Tillett site, sufficient information was gathered. Still, the constant threat-turned-reality of human disturbance and development continuously strips the location of its cultural artifacts and, thus, relevancy.

But before we can entirely write off the Tillett site and those who have eroded its historical properties, we must understand its context in Native, English, and Colonial American history. Firstly, the components at the Tillett site characterize its long-running past, of which we (archaeologists and historians) are aware. There is first the Mount Pleasant component, spanning A.D. 400 to A.D. 800. This is followed by the Colington component, the “prehistoric manifestation of Carolina Algonkian culture, A.D. 800 to A.D. 1650,” and finally the Historic Period component, characterized by family farmsteads in which the land was cultivated from circa A.D. 1884 to 1920. During the first two eras of the site, it was used as a seasonal settlement for fishing, meaning the land was not fully inhabited year-round, but when the time came to harvest oysters and other shellfish. This impermanence and seasonality draw parallels to the island’s use today as a summer vacation locale. Still, the Algonkian community was far from on holiday.

The Tillett site includes a number of archaeological “features.” In layman’s terms, these are things dug up. The Tillett features include four human burial sites and a number of artifacts, including ceramics, smoking vessels like pipes, lithic artifacts like arrowheads and other rudimentary weaponry, bones, shells, and food remains —think shrimp peels and the charcoal used to cook them. This may be incredibly interesting for those of you with a penchant for archaeology. For the rest of you who have stumbled upon this page while waiting in an impossibly long line at the grocery store, here is why this is important. Native history and its intersection with conventional, textbook-approved “American history” is not made independently possible without each other.

What we learn from those who came and fished these shores before us teaches us of our future here. The wildlife caught and consumed, the treatment of storms on our shores. The diseases spread from colonists to natives. The battles fought over this sacred land all inform how we can continue successfully inhabiting this island today. 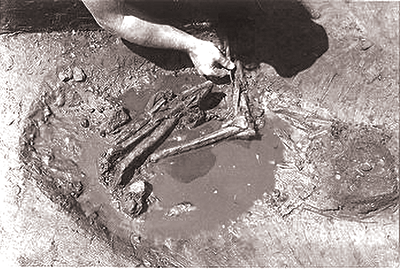 The orientation of the bodies buried at the Tillett site gives us a look at the social hierarchy of the tribe. For example, burials of the Algonkian-speaking tribes along the Eastern Seaboard (up to Massachusetts) indicate no difference in burial style based on a member’s social rank. This means tribal belief in the afterlife was not stratified by one’s station in life on earth; chiefs and fishermen were buried the same way, or so we thought. However, evidence gathered from burials at the Tillett site “suggest differential treatment of the dead from different ranks in class-stratified society,” the same report explains. A recovered skeleton from the site was clearly stripped of skin and soft tissue and stored in a mortuary temple for some time before burial, a process described for political and religious leaders in all Algonkian societies from northern North Carolina to the Delaware River. This information gives us, to those looking for meaning in the larger colonial context, a picture of who early English settlers interacted with in their first steps on the Roanoke coast.

Most who live here know at least the briefest versions of the “Lost Colony” story, but here’s a brief overview for those who do not. The Tillett site spans 1500 years and at least two cultures. In August 1587, one hundred and fifteen English settlers arrived at Roanoke Island. John White was named governor of the colony. He was sent after some time back to England to gather new supplies for the struggling colony, which were making meager deals with the natives to sustain themselves on maize, the most recent colonial discovery for subsistence. White left behind his family, most famously his newborn granddaughter and first English-born child in the New World, Virginia Dare. Upon White’s arrival in England, he was ordered along with all able ships to fight against the Spanish Armada. His supply mission was derailed to defend the crown. In 1590, White returned to the Roanoke colony to find it completely deserted with no trace of his people save for the word ‘Croatoan’ carved into a balustrade. Attempts were made for years to come to locate any surviving members of the colony, with some accounts reporting a few white colonists were absorbed into surrounding tribes, evidenced by Anglican-featured natives within a reasonable distance of the original settlement. Still, there is no concrete support for this.

What does all of this mean? The first fishing community on Wanchese laid the groundwork for the bustling seafood port it is today. And while we may find it easy to gloss over the place’s rich past to justify the expansion of the economic success it provides today, local decision-makers needn’t forget how we must learn from the past to ensure the future. The Tillett site offers historical context for our island’s most popular and performed piece of folklore. It holds the key to understanding native populations in North Carolina and all along the east coast. Preservation of things old and new has been on the local agenda quite a bit lately, with threats to develop our disc golf course for housing, to name a singular issue. The ways in which we as a community rallied around our beloved leisurely activity must be mirrored in protecting our history as well, no matter the supposed “benefit.”

Emily Moliken is a freelance writer living on the Outer Banks 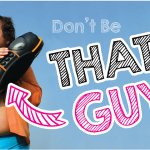 Don’t be THAT GUY!Coastal Life, Do It Yourself, Health Matters, I'm Just Sayin' - OBX, Just Causes, OBX Community, Something to Talk About 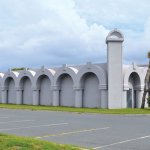 Blast from the PastBack In The Day