The Thing with Feathers

“Hope is the thing with feathers,” as poet Emily Dickinson famously wrote more than a century and a half ago. 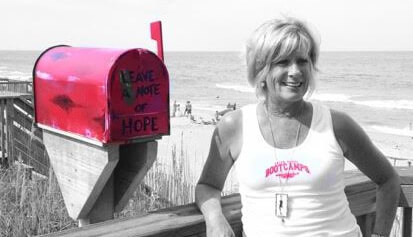 It’s a deceptively simple line that likely resonates strongly with the untold number of people who have visited the Little Red Mailbox at Kill Devil Hills’ Glenmere public beach access over the past two years – a site that was appropriately, and officially, renamed the “Hope Access at Glenmere Ave.” just last summer. A small sign with a reproduced painting of the mailbox by local artist Barbara Noel marks that change, encouraging visitors from all over to venture out on the access’ gazebo where they’ll find an unparalleled view of the Atlantic Ocean. There they can add to, or simply read through, the growing number of messages that collect there daily, which continue to speak volumes about some of our most basic human desires for connection, inspiration, and yes, a little more of that thing with feathers.

A Journey From Grief to Giving Back

Located at approximately milepost 8 on Virginia Dare Trail, the original Little Red Mailbox was the brainchild of local resident, Sue Goodrich, after her mother passed away suddenly a few years ago. Though Sue still grows emotional as she describes how difficult the immediate aftermath of losing her mother was, at the time she found some solace in making regular early-morning visits to the Glenmere beach access. It had been a special place for her since 2004 when her husband, Eddie, donated the gazebo and helped make other improvements there for the town’s benefit. After Sue’s monumental loss it became the perfect spot for her to be alone with her thoughts as she worked through the initial stages of her grief. 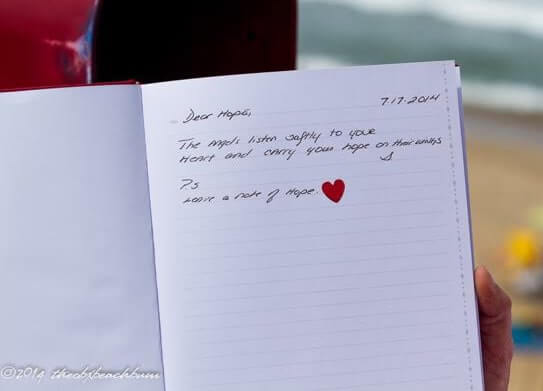 Though Sue doesn’t remember exactly when the idea for a local mailbox first came to her, she recalls a story she once heard about a mother in Wilmington who put up a mailbox so that people could offer their thoughts and condolences after she lost her son on a military tour of duty – which officials promptly made the woman take down. Sue says that she was similarly inspired by the Paris Bridge’s locks of love (which were also removed by city officials last summer, due, at least in part, to reported structural concerns over their growing weight), and the Kindred Spirit Mailbox that was placed on an isolated stretch of southern North Carolina’s Bird Island about 35 years ago.

According to Sue, something “clicked into place” when her friend and local photographer, Roy Edlund (who’s also known through his work as the OBX Beach Bum), shared a picture of the Glenmere access with her on social media. When she mentioned her idea to put a mailbox at the access, Roy encouraged her to contact the town and move forward with her vision – which she did…with some trepidation.

“I thought they were going to say ‘oh no, here comes another dreamer!’” says Sue with a laugh. Instead, to her surprise, the town was incredibly supportive from the start, and it wasn’t long before Sue also teamed up with local artist, Vicki Horning, who painted the mailbox and included an inscription on its door encouraging people to “leave a note of hope.” Only a few short weeks later, on July 17, 2014, the Little Red Mailbox had a permanent home at Glenmere. In order to launch the project, Sue left a few pens and a journal inside the mailbox so that anyone who happened by could easily record their thoughts.

“It all happened a lot quicker than I ever imagined,” Sue says. 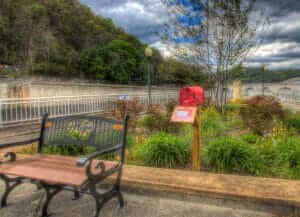 The Beginning of a Ripple Effect

As surprised as Sue was by the Little Red Mailbox’s quick acceptance at Glenmere, there were other surprises in store – not least of which was how fast the idea caught on in the community. People rapidly began filling the journals Sue (and at least one other anonymous donor) provided with everything from short inspirational quotes to longer missives about issues they were either struggling through or life events they wanted to celebrate. Cards and notes also began to pile up, along with other objects such as flowers and inscribed shells urging people to have strength.

Sue began documenting the mailbox on social media over the course of that first year, which led to yet another chapter in its story when Tasha Adams in Johnstown, Pennsylvania, happened across a Pinterest page Sue had created for the mailbox. Tasha works for Alleghenies Unlimited Care Providers, a nonprofit organization that assists people of all ages who are dealing with a variety of mental or physical disabilities. Part of her job includes working with more than 200 caregivers, and she constantly tries to research ways to make them feel more appreciated. Though Tasha’s never even visited the Outer Banks, as she read more about the impact the mailbox was having here she became increasingly intrigued.

“I knew it was a long shot, but I emailed Sue and explained that I wanted to bring her idea to Pennsylvania as a ‘sister mailbox’ so that we could spread her hope a little further,” Tasha says. “She actually called me a few days later, and I was shocked!” 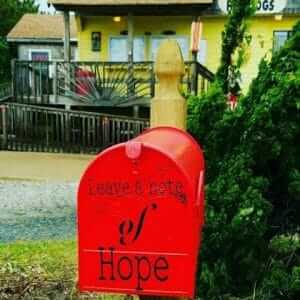 Sue was so excited about the idea of a sister mailbox that she commissioned Vicki to paint another one labeled “Mailbox #2 Johnstown, PA” on the back. Tasha did all the legwork of getting permission to place the mailbox at Point Park where the Stonycreek and the Little Conemaugh rivers meet – the site of a historic flood that almost decimated Johnstown in 1889. On April 14, 2016, a ribbon-cutting ceremony was held there that included representatives from 20 other local nonprofits who joined together to create their own unique messages of hope for their city’s future.

“I visit the mailbox often and am happy to see that there are always new entries,” Tasha says two months later. “It’s funny to me, and so fitting to the situation, because I was initially worried about people being respectful, but the same two pens I left there on that very first day are still inside. That alone, I think, shows the level of respect visitors have for this new beacon of hope in our city.”

In a discussion with Sue it’s interesting to note that she often uses the words “happy” and “sad” interchangeably. “To know real joy, you can’t be happy all the time. You have to experience both joy and sadness; that’s the deal,” Sue explains. “It can be sad to read about people’s struggles, but it also makes me happy to see people writing back to each other and making those connections.

“There are so many facets to happiness,” Sue continues. “And my mom always said that if you’re feeling really sad, the best thing you can do is help someone else. She was right. This has brought me a lot of peace.”

To some degree, this is likely because the Little Red Mailboxes – and the ideas behind them – continue to catch on even more. At the time of this publication, there are now three sister mailboxes to the original one at Glenmere, including the second one in Johnstown; a third one in Mechanicsville, Virginia; and a fourth one that was placed in Rodanthe this past May. Through the original mailbox’s Facebook page, Sue now receives a growing number of requests for more Little Red Mailboxes from places as nearby as Ocracoke and as far away as Lake Erie, Ohio.

The Town of Kill Devil Hills is also still a strong supporter of the Little Red Mailbox project. Right now they’re in the process of scanning at least 11 of the journals and other assorted notes, which will eventually be accessible in a digital format on the town’s website. They’ve also established a physical address so that people who can’t visit the mailbox in person can send their notes of hope from all over the world 365 days a year. And, similar to the popular social media idea of “Throwback Thursdays,” they’ve started a “Mailbox Mondays” theme on their Facebook page where they post a select scanned image from the Little Red Mailbox’s ever-growing collection at the beginning of each week. 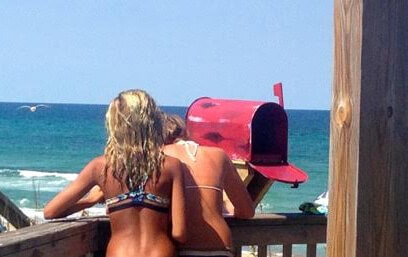 Beachgoers write notes of hope at the Glenmere access. Photo by Sue Goodrich.

Town officials were even on hand this past March to greet Stacie Holzberger, an eighth grade English teacher with Virginia’s Rockingham County Public Schools. Stacie also learned about the mailbox through social media, and subsequently had her students write their own notes of hope in order to create a large journal of the children’s work. She presented this journal to Sue and Mayor Sheila Davies at Glenmere access, and the town plans to make a digital copy of the project available to the public soon.

“The town’s continued support has been unbelievable, especially because we’ve come to the point where we need to create a solid plan for the future,” says Sue. “The questions that a lot of us have started asking is now what? How do we further display and preserve these messages in a physical way? We’re still in the process of figuring these things out, and we’re open to suggestions from everyone in the community.”

Continuing to Hear the Song

Although the first line of Emily Dickinson’s short verse about hope is by far the most well known, the poem includes a total of three stanzas that further describe the song that hope sings as it “perches in the soul,” where it can weather even the most difficult storms and other circumstances, and how that song’s message can be heard everywhere – perhaps, at least, if you’re willing to listen to it.

Sue echoes a similar sentiment about the Little Red Mailboxes and the tangible ways they can encourage people to hear, and also voice, their relationship with hope, especially during difficult times. “Sometimes when you’re at a low point your mind goes quiet, and you can have some beautiful thoughts,” she says. “One thing I’ve realized throughout this process is that people aren’t all that different. We all have challenges in our lives, but that physical aspect of putting things down on paper can be therapeutic. I just say write, write everything down – and don’t ever give up.” ♦

Amelia Boldaji is a freelance writer and editor who grew up on the Outer Banks, and she loves that the idea behind the first Little Red Mailbox has truly found its wings. 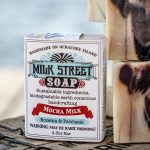 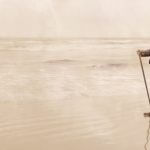